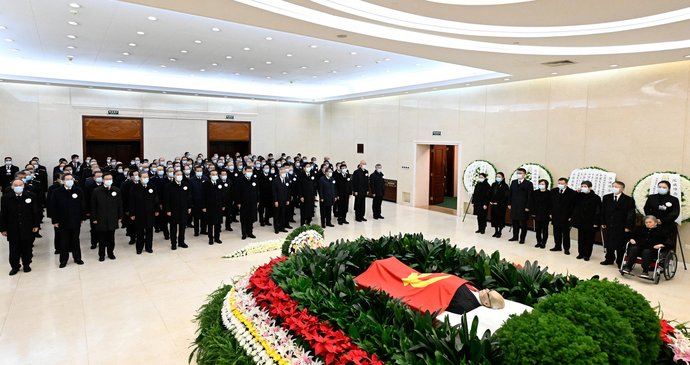 He was president from 1993 to 2003. He went down in Chinese history mainly thanks to him economic reform; bringing China into the World Trade Organization (WTO) and allow private enterprise. Beyond the borders, however, Jiang Zemin retains the label of a strict authoritarian leader.

“The 1980s and 1990s were a period of political storm in our country and abroad, socialism in the world was facing big problems. Some Western countries have imposed so-called sanctions against China,” the current President Xi told the audience at today’s funeral.

The former president died last week at the age of 96 from leukemia and multiple organ failure. Participants at today’s funeral observed a three-minute silence for the former president, during which sirens sounded across the country and trading in financial and stock markets ceased.

On Monday Senior Chinese officials pay their respects to Jiang Zemin’s body, which – covered by the national flag – is on display at a military hospital in Beijing. The remains were then taken for cremation to Papaoshan Revolutionary Cemetery in Beijing, where a number of high-ranking Chinese officials who have died are buried.

He was also seen at a funeral service today and on Monday at a military hospital former president Hu Jinchao, who has not appeared in public since Oct. 22, when he was suddenly taken from the hall during the Communist Party congress. The disruption to the perfectly staged event has sparked much speculation, writes AFP.

The 79-year-old former Chinese leader Chu looked tired at the convention, and the official New China news agency wrote at the time that he left the hall feeling unwell. But according to others, Chu’s apparent displeasure at his departure indicated political motives.

Some commentators interpreted the incident as a clear message from current President Xi Jinping to anyone who tries to oppose him. More recently, he appointed his close associates to all top positions and by amending the constitution he got the possibility of unlimited government.

AFP reported that Hu Jintao stood beside President Xi at a military hospital on Monday. He allegedly appeared to be unsteady as he walked and was accompanied by an assistant.