Czech canoeists were bothered by the technology in the prime virtual SP, but they welcomed the novelty 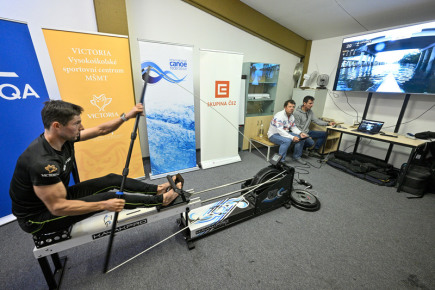 Prague – Czech rivals were fussed over by technology during the premiere of a virtual World Cup hosted by the International Canoe Federation (ICF). The bug appeared in the simulator they had set up at the shipyard in Prague – Troja, slowing down the actual speed. Because of this, they end up at the bottom of the results list. But they see the new format as fun entertainment with potential for the future.

Jiří Prskavec, Olympic champion in water slalom, also paid for the mistake. “I should have gone nine minutes, I went fifteen minutes, and they stopped me before the finish line, so I’m not completely satisfied,” he said in a press release. “I think it has a future, but some technical issues have to be resolved. I believe that in the future, this is how junior competitors can compete with their idols in winter, and this should be the case,” he added.

Para-canoers are given the opportunity to participate in the event with healthy competitors. This was also appreciated by Miroslav Šperk, a former discus throw silver medalist from the Paralympics, who started a new sport. “It was a lot of hard work, quite a long time and I struggled I must say. But I think it has potential. It will connect people from all over the world nice and simple,” he said.

Anežka Paloudová takes part in the women’s race. He only got the offer on Monday and was quite nervous. “In the end, the nerves died down and I’m satisfied with my performance, even though the result was not much due to technical problems. I’m happy to be able to run something this long on the coach,” Paloudová commented on the race, which was a little over two kilometers long. They mainly ride five hundred and one kilometers on the water.