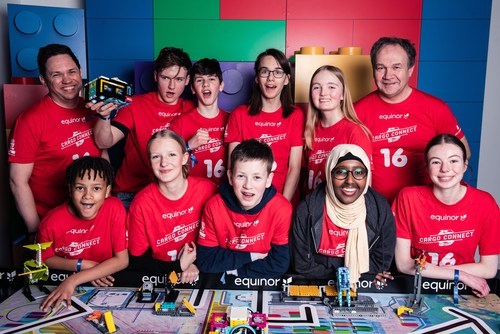 On Saturday 12 March, the talents of Bergen and 44 other teams competed during the Scandinavian finals in the FIRST LEGO League. Holen School’s Holen Teknodesign earned second place in the Technology Awards, and was lauded for phenomenal efforts by the jury and organisers. – High levels and a very sharp head, says Liv Ims, project manager at Equinor Tomorrow’s heroes about Holen Teknodesign.

The fun is on the roof during Saturday’s Scandinavian final at FIRST LEGO League, the world’s largest science and technology competition, when more than 500 children and youth can finally meet again for the Scandinavian physical finals for the first time since 2019. FIRST Scandinavia is behind the competition, which with the support of Equinor is working to raise the younger generation people’s interest in technology and science to become future engineers and scientists. It’s precisely Bergen students and other young people with the extra gear and encouragement we need in the future, says Silje Kumeus, concept manager at FIRST Scandinavia.

Although the fierce competition didn’t end with the flag reaching the top for the Bergen gang, the young team was able to smile widely at second place in the Technology Prize and praise, applause and cheers from the judges, organizers and spectators.

Picking up silver with distribution warehouse solutions
In November of last year impressive programmers and their innovative projects collected the most points and thus came out on top in the regional finals in FIRST LEGO League in Bergen. With this year’s theme «Cargo Connect», the team has been looking for the best transportation solution, where the team from Bergen researched the efficiency of transportation routes in the Spar Kjøp distribution warehouse.

– The fact that children and youth are involved in science and programming is important and crucial for the challenges of society in the future. Science can be both demanding and complicated, but today Holen Teknodesign from Bergen has shown that having fun can be done too. This team is made up of some incredibly sharp heads, and it is these heroes who will make a huge difference in the future, said Liv Ims, project manager at Equinor Tomorrow’s Heroes.

The gang from Bergen can rejoice over the second place in the Technology Prize.

Encouraging more people to explore the science universe
The goal of the FIRST LEGO League, hosted by FIRST Scandinavia and supported by Equinor Tomorrow’s Heroes, is to show how fun, educational and rewarding science can be. Kumeus never ceases to be impressed by the enthusiasm and creativity of young people. Now he hopes more will follow to excite future researchers.

– When this year’s task is announced, the team must be creative and innovative to find good solutions to challenges in the field of transportation. It’s interesting to see great ideas come up from the team, which are solutions that adults haven’t thought of yet. “These children and youth are our future, and I think we can say with certainty that the future is bright,” said Kumeus.

After the final round, it was finally RoadSnack from Skjervøy who could adorn himself with the title of Champion of FIRST LEGO League this year. Thus, the team gets the opportunity to represent Norway and Skjervøy in the global final which will be held in the USA in June 2022.

Kumeus concludes by encouraging teachers and students to take part in the FIRST LEGO League, for a learning experience they will never forget. Registration for this year’s season begins April 1.