Lipavsky: Europeans have woken up and must now take on Putin’s imperial vision 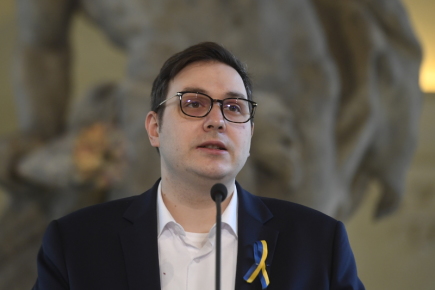 Berlin – Many Europeans have long been unwilling to understand the regime of Russian President Vladimir Putin, even though a number of politicians and experts, especially from Central and Eastern Europe, have warned it. Published today interview Czech Foreign Minister Jan Lipavský said this with the daily Die Welt. He also praised the unity of the European Union in the dispute with Moscow and stressed the importance of Germany’s decision to provide weapons to Ukraine.

“The fact that Germany is helping Ukraine not only financially but also by supplying arms is very important. Ukraine has a chance to decide this war only if we supply it with weapons,” the Czech head of diplomacy said. Germany has long refused to supply weapons to Kiev, explaining its special responsibility for European security after World War II. But after Russia’s invasion of Ukraine, his attitude changed.

Lipavsky said that hardly anyone expected an escalation of the conflict in the war, although many experienced Russians warned of such a dramatic scenario. “In our case, this is the experience of the Prague Spring of 1968, when we were occupied by Soviet troops,” he said.

Die Welt points out that in Germany, a number of politicians who still support Putin are now turning their backs on the Kremlin. “Milos Zeman, your president and admirer of Putin, just distance yourself from him now,” the daily said. Lipavský replied that Europe is playing a risky game as it tries to find answers to the question of how to protect itself from an aggressive Russia and at the same time maintain trade relations with it. According to Lipavsky, Europe does not want to understand the essence of the Putin regime even after the war in Georgia, the annexation of the Crimean peninsula of Ukraine, the armed conflict in the Donbas or the actions of the Russian secret services in England, the Czech Republic. Republic or Berlin. “We can wake up earlier, yes. But the important thing is that we all wake up now,” he said.

Lipavský spoke to the daily about how much of the Czech public condemned the Russian invasion and was shaken by the bombings and the flight of civilians. “And all because someone had a crazy vision of building a new Soviet empire. Europeans should take that vision from Putin,” he said. He noted that he was very pleased with the clear German position, which was finally taken. “Need Germany, but now behind the fundamental changes,” he said.

Die Welt also asked Lipavský whether the Visegrad Group, consisting of the Czech Republic, Slovakia, Poland and Hungary, had not undergone fundamental changes due to internal disputes. He cited as examples the disapproval of Prague’s daily reservation of the Polish coal mine Turów or Hungarian Prime Minister Viktor Orbán’s skepticism about anti-Russian sanctions.

“There have always been some differences between the neighbors, but they don’t play a role now. The dispute over the Turów lignite mine is resolved. I have good relations with my partners in Poland and Hungary,” Lipavský replied. “What is important now is that the whole EU is united,” he added.