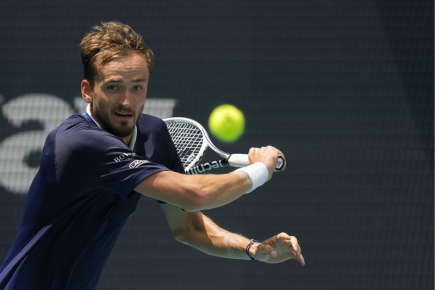 Miami – Russia’s Daniil Medvedev lost in the quarter-finals of the tournament in Miami to reigning champion Hubert Hurkacz and will not return to the top of the world rankings. He lost to his Polish opponents 6:7, 3:6, so he will remain behind Serbian star Novak Djokovic in Monday’s ATP standings.

Twenty-six-year-old Medvedev sat on the tennis throne a month ago, but after three weeks he had to hand it over to Djokovic again. The Serb decided not to start in Florida due to coronavirus restrictions and prefers time with his family.

The Moscow natives lost against Hurkacz from the start. At 2:5, he turned two sets, but he didn’t save the first set and lost in the tie-break 7:9. Halfway through the second set, he requested a brief medical break and no longer bothered the world’s top ten. The Pole kept his second trophy chance from the Masters, leveling at 2:2.

“The key is definitely the return. I was also successful on the forehand. I spent a lot of time in Florida and I’m used to the conditions here, maybe that was my advantage today,” said Hurkacz. His opponent, last year’s US Open winner, held his stomach in a meeting with doctors, Reuters said he was dizzy.