News, Weather | Ready for the mountains at Easter? That’s how it is now 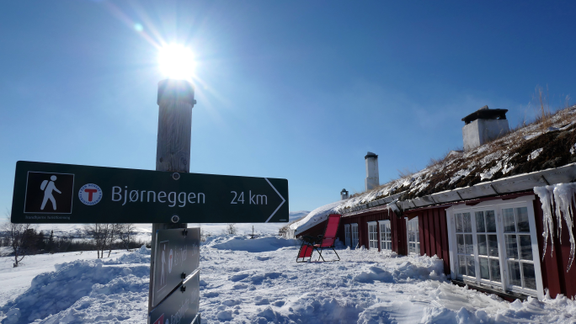 – There are many who ask if there is snow in the mountains now, and I understand that well! People dream of the Easter mountains now that serviced cabins are open and it’s possible to go from cabin to cabin again after a few boring years of the pandemic, said Dag Terje Klarp Solvang, secretary general of the Norwegian Tourist Association, in a press release from DNT.

While there is little snow in much of the lower mountainous areas where many have cabins, there is enough snow for skiing in most of the higher mountain areas. And Klarp Solvang believes there are many opportunities to experience the Easter dream.

– There are many places you can go to get snowboxes and skis this year too. Snow remained in the high mountains, and most of our cabins reported good ski conditions, he said.

Optimistic about Easter weather in Moss

Such is the driving condition

DNT has made the following overview of expected Easter conditions:

The Ryfylke prairie was in excellent condition. There’s been some fresh snow added this weekend and earlier this week, and it’s looking really good.

In Skarvheimen, conditions are very good after the snowfall in the last few days. Hard under and a nice layer of steering snow on top.

Great conditions and great skiing in Breheimen. Sota Sæter reports good conditions with heavy snow on the bottom and fresh snow on the top, with a snow depth of about 70-80 cm.

There are good conditions at Jotunheimen. Most of the snow is in the western region, but in recent days there has been between 5 and 15cm of snow in most places. This has provided a fantastic ski trail, with crust underneath and nice steering snow on top.

It was nice with snow in the highlands, and a bit of fresh snow on Sunday and Monday had provided good conditions. There was little snow in the southeastern highlands, but the fresh snow and freezing temperatures had improved conditions and now everything was ready for a lovely Easter holiday.

Fantastic conditions in the mountains of Western Norway with 10-15cm of fresh snow this week. If the weather changed to now, it would be an Easter dream in the mountains.

Conditions are generally good in Sunnmøre and in Tafjordfjella, and lots of snow in the mountains! New snow as high as 20 – 40 cm in recent days. Be aware of the danger of avalanches.

The audit at Reinheim reported good conditions at Dovrefjell. There has been an addition of 30cm of fresh snow and at minus degrees throughout the day, the queue will remain.

There was a lot of snow in Trollheimen and Sylan. The snow had settled well and leveled the dolphins on the terrain. It was sturdy and nice to walk on, with fresh snow on it. The triangle in Trollheimen has been trimmed and in Sylan the world’s largest year-round grid is ready.

In the northern part of Trndelag there is a lot of snow. It’s cold in the mountains and that keeps the skiing great. In the first part of Easter, lots of snow and wind have been reported, which can present a greater avalanche hazard in open areas – consider shoveling and hanging snow.

Lots of snow and good conditions in Troms and Finnmark. DNT Alta and the surrounding area report excellent skiing. Those planning a summit trek should be aware of the risk of avalanches.

It’s playable on Hedmarksvidda, and will run throughout Easter. Loud in the morning and soft in the afternoon.

Generally a little snow, but possible to ski where the slopes have settled NOTE: Liomseter is closed on Easter, but the self-service section is open.

At Rondvassbu in Rondane, conditions are good. There is little snow to the north and east of Rondane.OBS: Bjørnhollia and Grimsdalshytta are closed for Easter, but the self-service section is open.

Expect a lot of Easter traffic on the road: – Be a little “chicken”