No need to peel carrots anymore. Doctors and nurses from Ukraine will be given the opportunity to work in the field 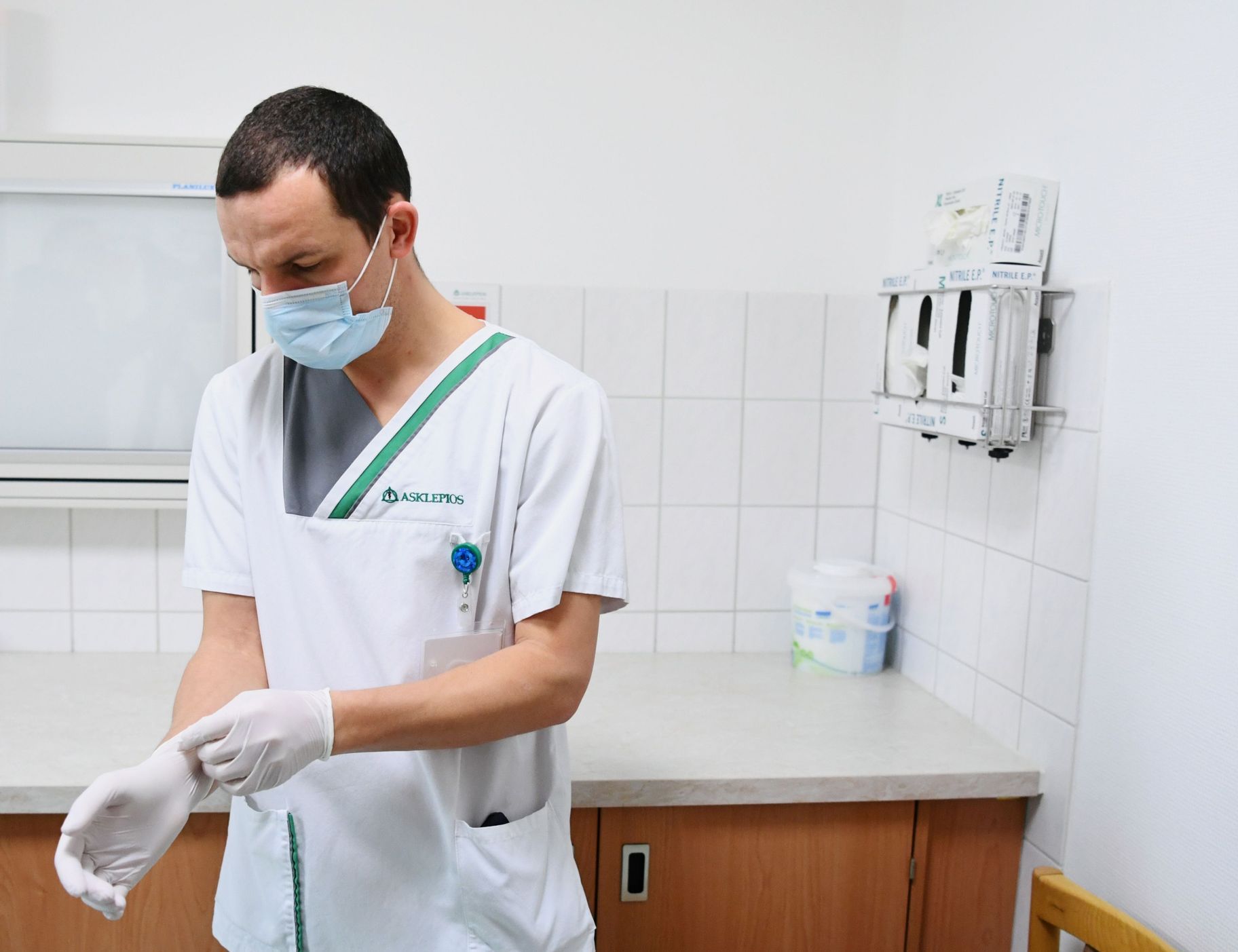 The Ministry of Health found a way for nurses and doctors from Ukraine to start working in the Czech Republic immediately. First, they will begin a three-month to one-year apprenticeship. When they pass the exam after that, they can stay permanently. According to the department, it is important for Ukrainians to learn Czech, but it is not a requirement for entry. Precisely because of the language barrier, healthcare professionals now often work in positions that are less qualified.

“We have read the law completely so we know how anyone from a country outside the European Union can be employed,” Undersecretary of Health Jakub Dvořáček told Aktuálně.cz. According to him, the resort has finally found a quick and safe way to allow Ukrainian doctors and nurses to work in their fields in the Czech Republic. If they find a hospital willing to accept them, they can start work immediately. This does not apply to general practitioners.

“We think that the most reasonable and quickest way to start is with a three-month internship, which can start immediately,” explains Dvořáček. Nurses must have a letter of invitation from the hospital that will accept them for the internship, as well as a passport, certificate of good conduct and proof of health. He did not need to submit a school diploma to enter the hospital. In addition, doctors must also have an educational certificate officially translated into Czech or a statement from an approved doctor who will supervise them.

The Ministry of Health will assess the documents and issue a professional internship permit. During these three months, it is not necessary for nurses and doctors to have so-called nostrified diplomas. Nostrification means higher education from abroad or a part thereof recognized as equivalent to that received in the Czech Republic.

For three months, Ukrainian health workers will work under the supervision of an approved health worker. “It makes sense even in inpatient facilities, where quite a few Ukrainians are already working at the moment, so it’s easier to carry out surveillance there,” explains Dvořáček. Therefore, he believes that hospitals that already have Ukrainian or Russian-speaking employees will mainly accept Ukrainian health workers. As of March 1, the Czech Medical Chamber registered 693 Ukrainian doctors.

The internship can be extended for up to one year, in which case the diploma must be notarized. The person will have three months to get it. But he will still work under the guidance of other workers. Extensions of internships can be requested multiple times, but are maximum for a total of three years for physicians, to two years for non-medical health professionals.

In addition to hospitals, the list of accredited workplaces where internships can take place includes psychological clinics, universities or regional cleaning stations.

According to Dvořáček, it makes sense for health workers to treat their compatriots first. However, because they will be working under supervision, they can also assist in the care of Czech patients. However, healthcare professionals starting their internship are not required to speak Czech. However, according to the deputy, it is important for them to study the language intensively for a while. The Ministry is therefore planning to increase the number of Czech language courses for health professionals.

If the health worker decides to stay in the hospital after the internship, he/she must take the consent and language proficiency exam at the same time. “If, within one year of employment, the health worker concerned does not pass the consent test and at the same time does not learn Czech, that makes no sense. But I think this is a long enough time to turn everything out,” said Dvořáček.

According to him, if someone wants to commit fraud, officers will immediately detect it. “They will soon see how the person works. This will immediately exclude those who may have fake diplomas found in Ukraine.”

According to him, the ministry is also considering whether to simplify approval exams for doctors. “For example, does a practitioner for children have to take a pathology exam. But again, we cannot avoid letting someone into the system who is not professionally qualified,” explains Dvořáček.

Jiří Kalenský, director of the Jilemnica hospital, explains that when a surgeon with fifteen years of experience comes, for example, he has to pass exams in other areas that he hasn’t studied in years. “If they are people with years of experience, then there is no point in trying them out in an area they are not good at,” he said.

Kubek: We’d better give the doctor time to study

The Ministry’s proposal was supported by the Chairman of the Czech Medical Society Jan Evangelisty Purkyně Štěpán Svačina. He believed that in the current situation, a path to exclusion must be sought. This refers to the situation after the Second World War, when many doctors were also unable to document diplomas. “The ministry is definitely operating in accordance with the applicable rules of the European Union,” said Svačina.

In contrast, the president of the Czech Chamber of Medicine, Milan Kubek, disagreed with the professional internship plan. “Ukrainian female doctors already have experience, they don’t lack it,” she said. According to him, the state should not force doctors to do menial work. “If they work as paramedics, assistants in hospitals or at UA points, we will solve our problem with the shortage of medical personnel, but it will be unfair to them,” Kubek warned.

According to her, Ukrainian female doctors should be able to start working as full-time doctors without supervision as soon as possible. To do this, they must pass language and approval exams, which Kubek says could take around a year. He therefore proposed canceling the professional practice that preceded the consent exam.

During practice, foreign doctors are often used as cheap labor, according to Kubek. “Interns last at least half a year and then usually longer because they can’t take the approval exam because they don’t have time to study and nobody helps them,” he said.

According to Kubek, the state should provide space for medical professionals to study for exams, for example finding a place to live or babysitting. “If they want to pass the exam, they have to study, not work,” he said. The Chamber of Medicine requires healthcare professionals to take intensive courses in Czech and medicine to pass consent exams. He also appealed to the state to cover all costs or for Ukraine to complete additional documents.

According to the head of the Nurses’ Association, Martina Šochmanová, knowing Czech is also important. “After years of experience, the language barrier seems to be the biggest problem. Healthcare is primarily about communication – with patients, staff, it’s team work and the team has to be able to communicate. I would definitely be scared if there was a reduction in the language requirements,” he pointed out.

Citizens of Ukraine have reported to the hospital

For example, at Jilemnica hospital they have hired two nurses from Ukraine, but only for extra work. “We accept them in a catering operation, where they do additional work, for example, they scrape carrots. There are people there who speak Russian, but they are ordered to speak with them in Czech as much as possible. At the same time, they will started taking Czech language courses,” explained the director of Kalenský.

According to her, Ukrainian women must first learn Czech and pass a language test to work as nurses. “We educate them at our own expense, but if the state intervenes, there will surely be enough lecturers,” he said.

Interest in the work of Ukrainian medical professionals has been noted by the Public Faculty Hospital in Prague and the Ostrava Faculty Hospital. “In the next few days, two nurses will join us and two doctors are scheduled to come for the initial interview,” said Petra Petlachová, a spokeswoman for the Ostrava hospital.

If doctors decide to stay in the Czech Republic in the future, this could solve their shortage problem. “Twenty-four-hour care is ensured by systematic violations of the Labor Code and circumvention of existing regulations,” explains Kubek. However, he believes there are not many female doctors among the refugees. “They may not want to leave patients in Ukraine, who need them more than patients here,” said Kubek.

According to the director of the Bulovka Faculty Hospital in Prague, Jana Kvačka, the capacity of the public healthcare system also needs attention. “By law, we have an obligation to take care of refugees as well as Czech citizens,” he said. According to him, the pressure on system capacity and waiting time for doctors will increase. According to the head of the Svačina medical society, the shortage of medical professionals was only in a few areas. “The tragic situation is in pediatric general medicine, and it’s a big problem with the number of children among refugees,” he said.

However, the Ministry of Health has no plans to involve Ukrainian practitioners yet. It may also be because communication between GPs and patients is more demanding than in a hospital setting. The practitioner is alone in surgery, while in the hospital the doctor has other colleagues who can help him communicate.

Video: The government is currently choosing a more expensive solution to the refugee crisis with a worse ending, Hůle warns

Either refugee camps can appear here and negative phenomena accompany them, or the government will decide to further support the stratification of refugees, says Daniel Hůle. | Video: Daniela Písařovicová