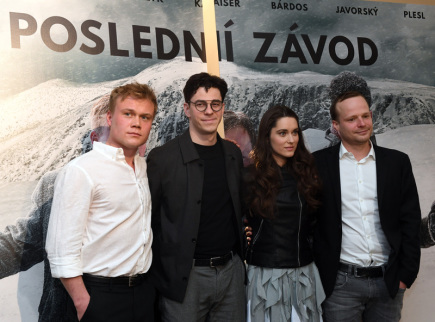 Prague – The sports drama The Last Race director Tomáš Hodan depicts a ski race in 1913, in which Bohumil Han and Václav Vrbata are killed. By studying period material, the creators managed to reconstruct the race minute by minute and show another key character in the whole story – Emerich Rath. The film will hit theaters on March 24, the anniversary of the then-race in the frozen mountains of the Giant Mountains.

By studying period material, the creators managed to accurately reconstruct the plants and remember the character of Rath. Athlete Rath was the only German who regularly took part in Czech races, other Germans from the Giant Mountains boycotted him for national reasons. After the first lap of the race, the weather worsened and a blizzard broke out. All competitors surrendered, Hanč was left alone on the track. Rath finds him half dead, and with the help of his own life he tries to save him, but in vain. Later, a frozen Vrbata is found in the mountains, a friend of Hanč, who wants to support him on the track and lend him his coat in a strong blizzard. After the events of Munich, World War II and the subsequent communist coup, the story of a German who risked his life to help a Czech friend was unsuccessful, and Rath was removed from the famous story.

The main role of Hanč will be played by Kryštof Hádek, other characters in the historical story are played by Marek Adamczyk, Oldřich Kaiser, Judit Bárdosová, Vladimír Pokorný, Vladimír Javorský and Jan Hájek.

The first close fell on February 21 at Františkov in the Giant Mountains, in the following days the staff moved to Medvědí boudy, Labská bouda, Luční bouda and other authentic places. In early February, the actors completed a hardening course to cope with the mountainous conditions. “I was interested in the story of Bohumil Han since childhood. Now I can feel the moments of his life in detail. Right in certain places where his fate really happened,” said Kryštof Hádek, Han’s representative.