The end of the war in Blanksko. The Nazis destroyed what they could. Help comes in twelve minutes 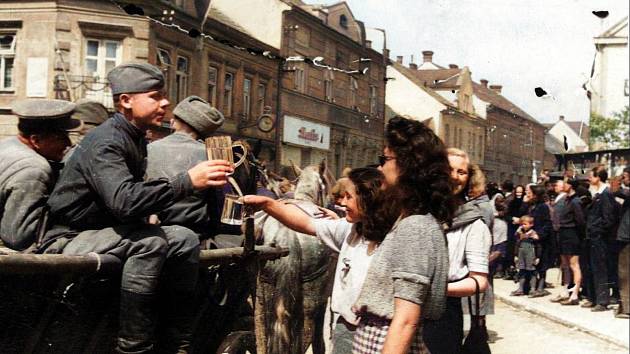 In addition to guerrilla activity, in which citizens of the USSR played a key role, domestic resistance was also activated. Some of the resistance, especially the Communists, actively cooperated with the guerrillas. At the end of the war, for example, the Vela resistance group was active in Blanco, focusing on providing reports on industrial production at the Blanco plant and carrying out various diversionary measures. The communist resistance group Předvoj from Dolní Lhota was also closely associated with Blansko.

The Nazi authorities responded to the resistance movement’s activities with repression, trying to keep the situation under control almost until the very last moment. In 1945, the Gestapo arrested three more citizens of Blansko (Bohumil Oujezdský, Jaroslav Plach – commander of Vela Blansko, and Josef ák) and two residents were even shot during armed clashes with the Gestapo (Karel Prášil and Alois Zedníček). Thus, in February and March 1945, the activity of the Blane Vela resistance was de facto paralyzed.

At the time of II. During World War II, Blancsko was one of the centers for the production of war materials. The Nazis mainly used the capacity of the largest local company – KD, where they introduced the production of armored vehicle parts, headlight parts and rocket launcher parts. Although Blansko did not have a permanent German garrison, in the first months of 1945 it was a place where lines of retreating German soldiers often passed and where the wounded from fighting on the approaching front lines were treated. For Germany’s needs, the Blansko schools in particular had to be vacated, where German soldiers, German schoolchildren and the wounded were transferred.

In April 1945, the retreating German unit of the so-called Deer Division (Hirschdivision) was stationed at the Ježek factory site, and production at the company had to be stopped. On April 25, the Ježek factory and other buildings in Blansko were subjected to a massive air raid, which killed 22 Blansko residents in addition to an unnamed number of German soldiers. More than 300 bombs were dropped on the city. In addition to the Ježek factory, the business school, elementary school building, burger school building, post office, and manor house were also badly damaged. In Blancsko, a total of 126 houses were affected and 6 of them were completely destroyed. The attack was carried out by the crew of the 218th Red Army Combat Air Division, equipped with American aircraft. The attack was a severe blow to the city, inflicted at the end of the war.

On April 26, Brno was released and it was only a matter of time before the wider neighborhood could be released.

In addition to the German army, many German refugees – civilians, who came here mainly after the liberation of Brno and tried to flee from the Red Army to the west, were concentrated in Blansko at this time. Germany put up more resistance in the difficult terrain between Brno and Blancsko. Since February 1945, many roads and roadblocks have been built in Blancsko, which made it difficult for the Red Army to advance. On May 5, 1945, the Prague Uprising broke out and in the following days another unit of the retreating German army arrived in Blansko. German soldiers liquidated or disposed of everything they didn’t need and scattered in the local forests, where they were pursued by revolutionary and guerrilla units.

May 8, 1945 ended II. capitulation of world war german army. German troops withdrew from Blancsko on the night of 8-9 May. The last infantry division left the city on May 9 at around seven in the morning. In Blansko, the Germans left only a small destroyer unit, which was destroyed and in the morning, after the retreat of another unit, destroyed both reinforced concrete bridges over Svitava – at the train station and at the Blansko-město stop. Initially, the Germans also wanted to destroy the iron truss bridge in the wall near the Ježek factory, but was saved by Karel Musil, a resident of Blansko, who snuck up on him and released two payloads, ready to be detonated.

Legend of the Moravian Karst. The Krkanka Stone is named after a terrifying event

Behind the retreating German army, the Red Army immediately penetrated the city. His troops entered Blansko after 11 am in the direction from Jedovnice, drove along the ditches along Punkva, past the KD racing restaurant and then today on Masarykova Street towards the city. From there, several divisions advanced along the rescued flank to Staré Blanco and further to Olešná, chasing the fleeing German soldiers. In Blansko, crowds gathered in the streets of the Red Army, shouting glory to the liberators, saluting and hugging the soldiers, and giving them flowers and snacks. Czechoslovakian and Soviet flags are flown in public and private buildings. While the liberators were greeted with triumph, a number of Blansko residents, under the command of a Soviet officer, began building a makeshift bridge over Svitava at the Blansko-mesto stop, which was completed in two hours.

The liberation of the wider Brno and southeastern Moravia was carried out by the troops of the 2nd Ukrainian Front. Blansko himself was liberated by soldiers of the 232nd Sumsko-Kiev Rifle Division of the 51st Corps and members of the 6th Corps of the 4th Romanian Army.

Do you also have historical photos in your family album? Send us a text to blanensky@denik.cz. We will be happy to publish it.