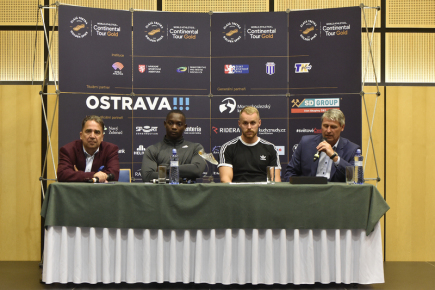 Ostrava – On Tuesday, more than two dozen medalists from last year’s Olympics in Tokyo, including Czech spearmen Jakub Vadlejch and Vítězslav Vesel, will feature in the athletics Zlaté tretře. The City Stadium in Vítkovice will also host the farewells of two-time world 400m hurdles champion Zuzana Hejnová and spearman Petr Frydrych, bronze medalist of the 2017 World Championships. After two years of “coronavirus”, this time the crowds can come without restrictions.

Farewell to Hejnová, who ended her career due to pregnancy, will take place before the 300-meter hurdles race. At this non-traditional distance, the Czech athlete became the fastest woman in history with a time of 38.16 seconds. However, her performances may be shaken, as Olympic bronze medalist and European long-distance record holder Femke Bolová will compete in the Golden Braces.

The 22-year-old Dutchwoman will enter the outdoor season on a shortened track. “I want to break that record, I feel good. But it’s my first race and it’s the right moment,” he said at today’s press conference. He regretted that he couldn’t race with Hejnov one last time. The Czech hurdle was an inspiration to the young Dutchman. “I remember I couldn’t sleep once before a race, so I watched his biggest race. I admired him, he ran great. It’s great that he will at least watch,” he said.

Olympic high jump winner Gianmarco Tamberi, unlike Bolová, has raced this open season, but has not won once. The maximum is 225 centimeters. He wants to change that on Tuesday. “I definitely want to add a few inches tomorrow. Next week is an important competition for me, the Gold Gala, so I wanted to come there prepared,” he explains why the Golden Stage is such an important intermediate step. The Italian jumper is in Ostrava for the third time, but he does not yet have a glass trophy in his collection. “I must have missed him there,” he smiled as he looked at her on the table.

That trophy was also shared by another Tokyo Olympic champion Jasmine Camach-Quinn, who dominated the 100m hurdles in under five laps. He arrived in Ostrava after Saturday’s win in Eugene, USA. Organizers promised her an attack on the meeting record of 12.55 seconds, which has been held since 2015 by Jamaican woman Sharika Nelvisová. “What happens will happen. I’m not going to focus on any particular time. I just want to run to the finish line in good health,” said the Puerto Rican star.

Felixová, a multi-medalist from the Olympics and World Championships, is having a unique season. Before he even started, he decided it would be his last. Therefore, he chose European plants. “I’m looking for a place where I enjoy it and where it makes sense to me,” he said. There will be two hundred in Ostrava. “This was my last race, I enjoyed it. I approached them in a completely different way. But it’s a bit of a challenge to enjoy it all the time, because I still have a racing heart,” said the 36-year-old American. .

In addition to world stars, the best Czech athletes will also compete in the Golden Braces, which is an opportunity to earn significant points in the world rankings. Tretra belongs to the Continental Tour gold category, which belongs to the Diamond League. The organizers hope that as many fans as possible will come. “The audience has always been the driving force not only for the contestants, but also for the organizers. I’m sure they will come, and I’m looking forward to them. I miss those two years here,” said the meeting’s director, Jan Elezn.