There will be a 77th celebration of the end of the war in Pilsen on Sunday, with tens of thousands of people expected to arrive 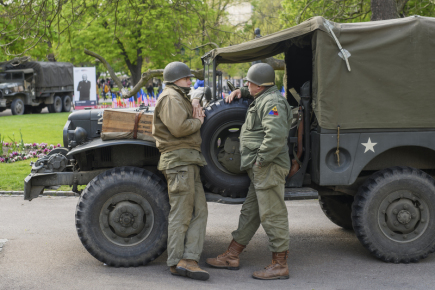 Pilsen – The 77th anniversary of the end of the war begins in Pilsen today. Three American and two Belgian veterans, who liberated the city in 1945, will attend the Freedom Festival, which will run through Sunday, May 8. Pilsen is the only city in Europe that annually hosts the grand celebration with the participation of American veterans, they are similar only on the landing beaches in Normandy, city council member Veronika Jilichová Nová (ODS) told TK.

The celebration, which is once again expected by tens of thousands of visitors from the Czech Republic and abroad, will offer period military camps and a 200-car Liberty Convoy of military equipment rides. The main memorial service will take place on Friday, May 6, at 4:00 pm at Thanksgiving Memorial, America! He will be accompanied by a flight of period planes, such as the Hawker Hurricane, which will be presented at the celebrations for the first time in Pilsen.

The big event was Saturday’s gala night in the square, called Thank you boys! directed by Michal Caban. “This is especially recent because we are seeing the number of veterans declining. But the memories of those who experienced it and the witnesses in Pilsen are also declining. And we need to raise this issue and show in the story that we must defend freedom, memory and And that quiet night must trying to do that,” said Jilichová Nová.

People will be able to meet the veterans face-to-face on Saturday at Pilsen Field after the gala night and after the convoy’s arrival on Sunday.

The biggest change compared to traditional years is the partial transfer of the military history program from the now reconstructed park behind the Plaza shopping center to the garden circuit around the central square. The combined section representing the legacy of the Czechoslovak Independent Armored Brigade with participants from the Netherlands, England and Slovakia with period technology will be presented in the new U Ježíška area near the train station. The RAF and WAAF (Women’s Auxiliary Air Corps) camps also have facilities there, nearby with a 1:1 scale replica of the Spitfire fighter. The Army Rifle Stadium in Lobzy will feature air and ground troops as well as Czech Army special forces.

Today’s introductory events included the laying of flowers at the Memorial of the 2nd Infantry Division in Chodské náměstí starting at 10:00, an hour later on Husova Street near the Memorial of the 16th Armored Division and the Memorial for Soldiers Fighting on the Western Front, and at 16:00 acts of the same tribute to náměstí Míru at the memorial of the fighters and victims of world war, the fallen aeroclub members and the Pilsenians in the May 1945 uprising.

The program is active www.slavnostisvobody.cz.