They commemorate Understanding Autism World at the Hvězda cinema in Hradiště 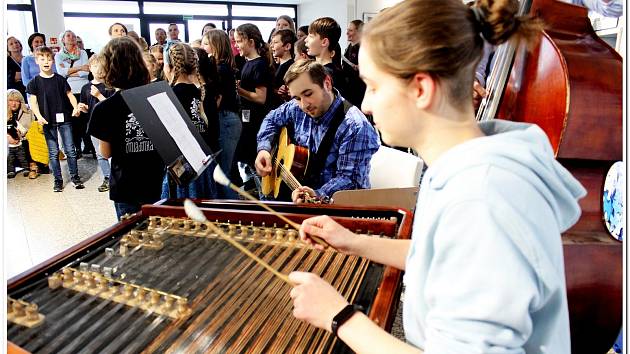 Enter our world! Even so, this could be called the opening of the artworks of students from the Uherské Hradiště Elementary and Kindergarten, afaříkova, a school for students with special needs. The opening was opened in the Hvězda cinema by the children’s ensemble and dulcimer Omladinka music on the occasion of World Autism Awareness Day.

They commemorate Understanding Autism World at the Hvězda cinema in Hradiště

“The aim of our exhibition is to inform the public about the problem of autism and to show that, despite their differences, people with autism spectrum disorders are fundamentally the same as the rest of us. Our exhibition documents the intertwining of two worlds – our world and the world of children- autistic children,” says Karel Zerzáň, director of Primary Schools and Kindergartens at Uherské Hradišt with special educational needs.

“Awareness raising events are taking place around the world on April 2. People are dressed in blue and some important buildings are illuminated in blue. That’s why Hradišt town hall has been in September for the sixth year in a row, this year even for a whole week ,” said principal Karel Zerzáň.

You can light up blue in different ways, not just by lighting up buildings. Support and solidarity with people on the spectrum can be expressed by spreading awareness about autism, sharing information, the blue element of clothing or social events.

“Throughout the second day of April, our entire family has been involved in supporting World Autism Awareness Day for three years as our son suffers from an autism spectrum disorder. Even at home, we were dressed in blue that day and we made pictures with him in blue,” said the boy’s parents who did not want to be named.

At the exhibition, visitors can see school artworks that represent the world from the point of view of an autistic person. “Students of the Uherské Hradiště High School of Applied Arts, who are long-term supporters and very welcoming partners of our activities, are happy to help them with their own work. The photos then illustrate the process of creating the artwork,” explains Karel Zerzáň and thanks him. thanks to all who participated in organizing the event. He also paid tribute to his dedicated parents and a number of employees of the Uherské Hradiště Primary and Kindergarten, afaříkova. The screening of the British film The Wonderful Seven took place in the cinema at the end of the imaginary opening .

Subscribe to Deník.cz and read them all without restrictions and limitations. Again here.