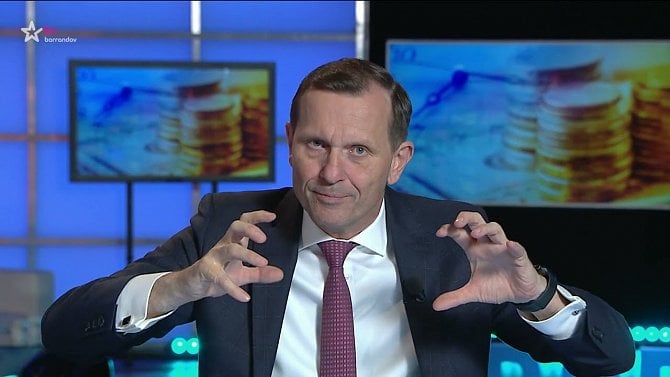 Jaromír Soukup remains by far the most powerful moderator on Czech television screens. The owner and director of the Barrandov television group is the king of studio formats, where in a small area only the basic scene is changed, lighting is changed, and new shows are born. Most of Barrandov’s evening broadcasts are based on how long Jaromír Soukup can talk on any topic.

However, Barrandov’s production and editorial opportunities are so limited that you cannot visually differentiate between news, journalism and entertainment. Everything is directed and filmed the same way: Jaromír Soukup is sitting at a table, in a chair or going to the screen. As there were no reports or no staff on the ground, everything was done indoors and the graphic equipment was limited to agency photos projected on a display next to the moderator. The cameraman replaces the overall shot with details, sometimes the angle changes.

With this processing, Barrandov saves money, but looks more like an American political YouTuber than a modern television show. News from the company, related to the name of the fortnight VIP Svět, which also belongs to Jaromír Soukup, was also taken in the form of an annotated photo.

In addition, the media entrepreneur is a universal moderator so he also gets the genre in Barrandov cooking with celebrities. Often on screen the shows are missing what makes the viewer more attractive: interest, uniqueness, difference, and fit. If a moderator is on screen at any time, you won’t be familiar with the author’s show.

For example, on Monday, April 4, 2022, the Jaromír Soukup belongs to the entire evening block from 7:25 p.m., when My Messages begins, until 11:10 p.m., when the Jaromír Soukup Instinct ends. During this time, he alternated between several roles: political commentator, glossary of show business terms, moderator of political debate, and moderator of interviews with popular figures. Each of these disciplines is usually a specialized skill that requires editorial preparation. However, Soukup moves from one role to another without changing his moderation style significantly.

A nearly identical program composition follows on Tuesdays and Wednesdays. On Thursday, Jaromír Soukup also spoke with Miroslav Kalousek, and on Friday, the show ended at 21:20. Weekend nights provided by reruns. On the one hand, Jaromír Soukup can proudly premiere every weekday. However, at the same time, their content is so interchangeable that Barrandov can repeat it at any time.

Moderator Honza Musil supported Soukup to broadcast for a long time, but Barrandov has ended his collaboration with him. While the Jaromír Soukup program dominates the main station of the Barrandov group, the archive edition of Dangerous Relations with Honza Musil, on the other hand, dominates the secondary channel of Barrandov Kino.

By the way, even though the station was called Kino, it didn’t broadcast a single film for a whole week, according to a program published on the website. Talk show reruns alternated with long teleshopping blocks, and occasional reruns of episodes of the German television series Father Braun appeared.

What’s the license for?

However, things like this appear sporadically on Barrandova Kino’s broadcasts, moreover such work covers 24 hours of broadcast. In March, for example, the station broadcast the Dutch film The Warrior’s Journey, and also offers two French crime series The Art of Crime.

Something similar happened at the Barrandov Krimi station. The license terms (PDF) was a bit curious, because this station was originally created as a Barrandov Plus family program. Over time, it changes the focus and content, and part of the state of the program, but at the same time the main parameters of the license remain.

It is now said that Barrandov Krimi compiles the program throughout the day mainly from animation programs focusing on preschoolers, programs for schoolchildren, evening broadcasts for teenagers, evening documentaries and evening dramas. “New genres will be included in the program 24 hours a day, while maintaining a 51% share of mostly American children’s and documentaries programs for various age groups,” the last license change said in December 2018.

Reality? In addition to the rare occurrences of Pastor Braun already mentioned, court reality replays show Judge Barbara and Judge Alexander being rotated in the program. Acquisition programs, let alone America, are hard to find. Barrandov Krimi launched an archived edition of the show for parents We have children until the morning broadcast.

Due to deviations from the licensing terms, Barrandov’s broadcasting was handled in June 2021 by the Broadcasting Council, which gave the station operator 90 days to correct it. However, the current program of the Barrandov Group shows that the program library is not sufficient to cover three non-stop broadcasting stations. May not have enough funds to buy programs from foreign distributions, dub them (or buy rights to them) and provide them with closed captions according to the law.

Treasure of the land

One of the few novelties in Barrandov’s program, in which Jaromír Soukup does not appear, is another studio format called Treasure of the land. You may be familiar with this show: the beginning it was Prime TV Broadcast. Since 2018, has launched three series. Anyone who feels they have a valuable antique at home and wants to offer it up for sale to a group of five experienced buyers can enter the show.

As in Prime, Jan Rosák is the moderator of the event, and the scene remains the same. This show is based on the German model (original with the title Cash for Rare premiered in 2013 on ZDF). In Barrandov, this is considered an eighty-minute episode for the evening program, broadcast after two episodes from 5pm. The Treasure of the Land first appeared in Barrandov on February 14, 2022.

Treasures of the land moderated by Jan Rosák

However, the official Nielsen Admosphere electronic audience measurement data is available to the Association of Television Organizations showthat Barrandov failed to attract an audience. On the contrary: the Barrandov group decreased not only in the number of viewers, but also in the offers of operators who moved their stations to a lower position.

Back in January 2021, the Barrandov Group’s daily viewing average was 4.94 percent of viewers over the age of 15. Then interest in it started to decline and in November 2021 it fell below 3 percent – specifically 2.95 percent of people over 15 years old.

The decline can also be seen in prime time: in January 2021, about four percent of viewers sat down for the evening program of the Barrandov Group. In November of the same year, the average was only 2.27 percent of adults between 7 p.m. and 10 p.m.

In mid-March 2022, part of Barrandov’s group all day moved around 2.88 percent of viewers are over 15 years old, in prime time it’s 2.42 percent. These are roughly the same proportions that Prima Max or Nova Cinema can produce on their own.

Barrandov announced the news of the program basically by accident, it was not a comprehensive basis for individual seasons, as other television stations do. In addition to Treasure of the Ground, the station features a half hour investment advisor this year, again with Jaromír Soukup in front of the camera. premiere How to be rich? he was released on January 26, and has since recorded several episodes.

You want to have email every morning an overview of recent articles from Forget? Order our email service and you won’t miss any important information. You can also order weekly overview or also Newsletter Main thingsummary of Friday’s most important articles from all our servers.