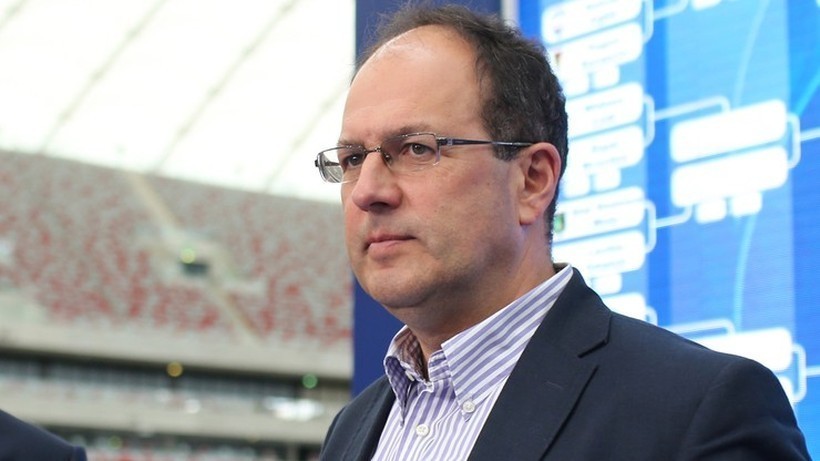 Yes, yes, also Polsat, because just like the American and British intelligence that bravely serves Ukraine every day, our knowledge and business experience, especially Maciek Stec and Piotr Pykel, allows us to support the Polish Volleyball Federation and carry out this winning process inside time record. Of course, for the final success, the unprecedented attitude of the Polish government and the Ministry of Sports is also important in the context of the recent history of Polish sports. As soon as the international volleyball federation FIVB seriously considered taking Russia’s right to host the 2022 World Cup, a thought started to appear in some Polish heads that maybe this was an opportunity for us. Of course, there is much concern and reflection on the liabilities and assets of this action. First of all, at the Polish Volleyball Federation, where the new president, Sebastian Widerski, ruled in October, it is claimed that it takes at least two years to properly prepare for such an event.

And that’s the truth. Anyway, this is the experience we have from 2014. At that time, developing plans for the inauguration of the championship at the Warsaw National Stadium was a challenge in itself. After all, for the first time in volleyball World Cup history, volleyball players played in front of more than 60,000 spectators. His plan, apparently insane, succeeded and entered volleyball history with gold letters in volleyball history as the best promotion of this sporting discipline in history, which is funny in this context, called for decades – the “club game” . Our friends from the FIVB remember him very well, so we had an edge over other fairly exotic, but rich rivals from the Persian Gulf and the Antipode at the start of the talk about Russia. However, having an advantage does not mean winning, especially since Italy, France and the Netherlands are also eager to host the World Cup. The struggle for the tournament lasted for a good month, and the key to the resolution was probably a personal visit to the FIVB headquarters, in Lausanne, the Minister for Sport in the Polish Government, Kamil Bortniczuk and the President of the Polish Football Association, Sebastian Widerski, surrounded by a garland of competent advisers. The Polish delegation then had a long-term battle with the FIVB representatives of several individuals and the World Volleyball agency, which manages the global marketing of volleyball. This is not an easy talk, especially against the backdrop of war on the horizon and the FIVB’s fear of official and unofficial Russian reactions. In addition, the political spiciness of these negotiations is compounded by the fact that, according to the official FIVB procedure, Russia was removed from the tournament and will be replaced by Ukraine, who is ranked 23rd in the FIVB rankings. But this fact is also not clear. Therefore, from the very beginning of the talks, the Polish delegation explained as one of the terms of the agreement, in addition to suggesting that Ukraine play their match in Poland, if only because of the large influx of Ukrainian emigrants living in our country. country. The case was settled for Ukraine only on Thursday at a special meeting of the FIVB Council by a vote of 34 to 2. Whoever is against, I do not need to write …

So we have a championship that we are going to do with Slovenia, and the sparrows on the roof are also chirping with the Italians and you should enjoy it. Let’s rejoice, because we will play what is most important with us: both the semifinals and the match for medals. And there’s nothing strange about it. Poland today, like perhaps no other “volleyball” country in the world, deserves it. If, anywhere, volleyball is catching up, the global leader in popularity among all sports – football, it’s in Poland above all. We know how to do well, how to train, how to maintain a high level of sport in the league and representation, and how to fill the halls with fans. We were able to provide the FIVB with an effective argument for promoting volleyball elsewhere in the world. And there is one more optimistic aspect of Poland’s FIVB action. An exemplary aspect of the collaboration of several Polish institutions, which by definition deal with something completely different on a daily basis, and can be combined in activities for the benefit of the Polish raison d’état. Although it sounds depressing today, in reality it was and ended in great success for Poland.

And I’m so proud because “I was there too, I drank honey and wine”. However, I am far from being able to say, like Onufry Zagłoba of Sienkiewicz, that “I did this for you without bragging, I did it!” creative process and I know what and who makes us successful. And its success is unquestionable and you have to shout it all over the world, because it’s neither easy nor cheap. But it works, and that’s the most important thing!