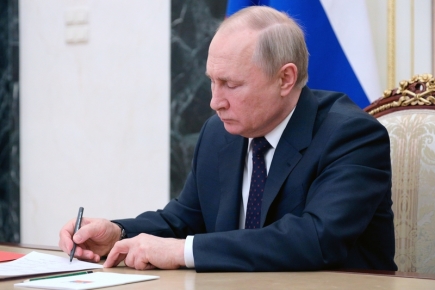 Moscow – Russian President Vladimir Putin today signed a newly passed law that threatens up to 15 years in prison for false reports on the activities of Russian state authorities working abroad to protect the interests of the country and its citizens. Russian media reported tonight.

The daily Kommersant recalled that the bill was put forward by the chairman of the House Committee on Information Policy Alexander Chinstejn of the ruling United Russia as an analogy to a previously adopted law, which threatens 15 years in prison for what authorities consider a false report. Russian armed forces.

According to the media, the Russian National Guard, which reports directly to Putin, is now working to pacify the conquered territories of Ukraine.

A law prohibiting the spread of fake news about Russian soldiers was passed in early March shortly after Russia launched its military invasion of Ukraine on February 24. According to critics, with its help the Kremlin forced the dissemination of information in Russia that did not exactly line up with its interpretation of the operation of Russian troops in Ukraine.