Tennis players in Argentina lost 0:4, Davis Cup final tournament will be without them 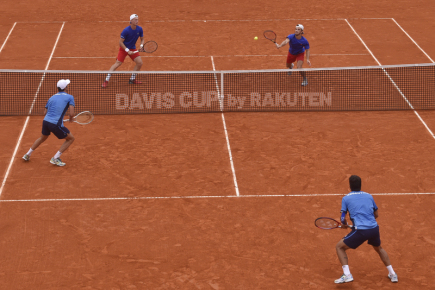 Buenos Aires – The Czech tennis player will not play in the final of this year’s Davis Cup tournament. In qualifying, they did not score a single point against favorites Argentina on clay in Buenos Aires and lost 0:4 in the match. Captain Jaroslav Navrátil’s entourage will face the lesser World Group I matches on September 16 and 17 this year, with the winner going to qualify for the final tournament in 2023.

In today’s opening match, the tennis players lost hope of getting a turn after losing to Tomáš Macháč to Jiří Lehečka in doubles with Horace Zeballos and Máxim González twice 4:6. When the decision was made, Vít Kopřiva lost to Federico Cori 2:6 , 4: 6 at the premiere at the competition.

In Friday’s singles, 20-year-old Lehečka lost to Sebastian Báez 6:7 and 3:6, and in the second match, 21-year-old and 131st ATP singles player Macháč lost 6:2, 2:6 and 3:6 after a promising start with fourteen world tennis player Diego Schwartzman.

“When we came here we didn’t think we would score a point. There were a lot of chances, no one was afraid, but the rabbits didn’t count until after the hunt,” said Captain Navrátil. “We lost, but even if we lose, the kids will learn from it. They see that you can play with these kids,” he points out that Lehečka and Macháč are now bravely fighting higher quality socks in Innsbruck.

According to the plan, Macháč and Lehečka replaced Zdeněk Kolář and Kopriva, who had originally played in doubles. But their youthful enthusiasm was not enough, opponents showed double quality. In particular, the fifth doubles player in Zeballos’ ATP rankings on the court excels in overview and volleyball.

The Czechs did not use their only breakball of the match and Macháč lost serve in the seventh game. The same player did not hold her serve early in the second set, and again, under the tutelage of the famous Gabriela Sabatini, one break was enough for the Argentine to win the set. “We had chances, but the opponent played well, more doubles. Unfortunately, we didn’t see each other on our return. It’s a shame,” Macháč said, adding: “It’s even more sad for Friday’s singles. If we have at least one win, the opponent might play differently.”

Almost all matches were played in light rain conditions. “It was a bit more slippery, but the pitch is in very good condition. In general, slow clay does not prove our game. We’re used to relying on serves, playing more aggressively and doubles playing singles, which we can’t do. used here,” said Lehečka.

For the first time since 2013, the tennis players missed Jiří Vesel, who apologized in advance after an agreement with the match captain. But he could return to the team in the fall.

“I believe our men’s tennis is improving thanks to the young players. Jirka Vesel also didn’t say a word, and I hope the sons will be healthy and ready for September so that we can play again in one year to advance to the final,” said Navrátil , who has been captain since August 2006 and in 2012 and 2013 the team led by Tomáš Berdych and Radek tpánek led two titles in the competition.

The Swedish tennis player also secured a place in the last 16, beating Japan 3:2, with Belgium over the same ratio over Finland and Italy over Slovakia. The smooth progress of 4:0 was celebrated by the Netherlands in the duel with Canada. A 3:1 win was delivered by Kazakhstan in the matches against Norway and Korea in the duel with Austria, which had to be done without Dominic Thiem.

Germany won 3:1 in Brazil, the decisive third point went to Alexander Zverev, who presented himself in the Davis Cup for the first time after a furious outburst and disqualification at the Acapulco tournament. The third player in the world rankings is still facing ATP disciplinary action.

The world’s 40th player, Korda, played the favorite role in the duel with Mejía, who is ranked 265th in the ATP standings, despite losing in sets. “I was pretty good. It went well and I’m glad I made it,” a Bradenton native told the AP after a game in which he helped himself to 12 aces.

Before the game, he took advice from his father and two-time Davis Cup winner Radek tpánek. In addition, he prepared himself for a week with Andre Agassi. “Everyone helped me a lot, they just calmed me down a bit. I have a lot of great people behind me and I’m happy that I managed to win my debut,” said Korda, who scored the first point of the match.

“Seby did a great job, he really struggled. It was difficult, of course, in the first single there was a lot of pressure. It was great that he won. I felt more confident at that time,” said Fritz.