“Widomości” criticized Tusk for the fact that, like Putin, he clapped too weakly to Lech Kaczyński 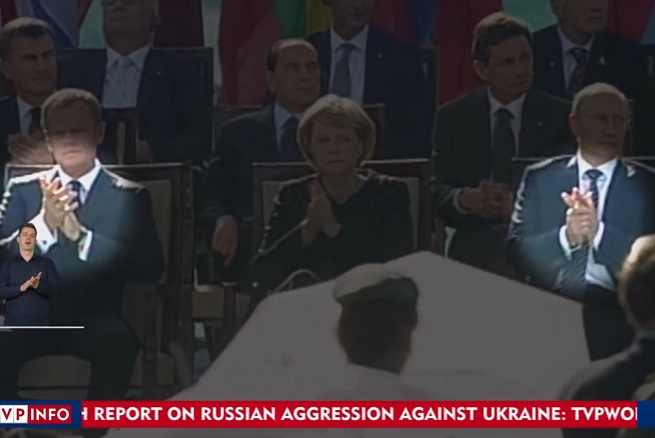 From February 24, “Wiadomości”, like all news services, was dominated by coverage of the Russian invasion of Ukraine and the arrival of hundreds of thousands of refugees from this country in Poland. However, since the middle of last week, the TVP program has been heavily criticized by the opposition led by Donald Tusk, this time in the context of relations with Russia.

In Thursday’s issue of “Wiadomości”, Maciej Sawicki’s report “The idiot who used to raise Putin” is featured. – Only in the face of a world war realized how many EU countries – closely and over the years – cooperated with Russia Putin. Western Europe often ignores further warning signals, and today in Ukraine innocent people are paying for it with their lives, Danuta Honecka said in the announcement material.

In his report, Sawicki recalled that prominent French and German politicians supported expanding cooperation with Russia in the area of ​​gas purchases (including the construction of Nord Stream 2), and similar opinions were expressed by PO politicians, criticizing the position expressed by Lech. Kaczyński on this subject.


A fragment is remembered Kaczyński’s speech on the 70th anniversary of the outbreak of World War II and, in slow motion, a photo of Angela Merkel, Donald Tusk and Vladimir Putin present at the ceremony. – After this speech, even as Angela Merkel applauded, Donald Tusk just nervously rubbed his hands, like Vladimir Putin – commented Maciej Sawicki.


#Message | France is looking good in Moscow, supplying Russia with weapons until 2020. It is no coincidence that positions at Russian energy companies were given to, among others, the former prime ministers of Finland, France, and the chancellors of Austria and Germany. pic.twitter.com/u4vgtp7eyT


Sawicki’s comments on this photo quickly spread to Twitter. – How to call the combination of Kremlinology with political palmistry, reading hands not as much as rubbing them (not applause)? “Widomości” do things so innovative that there is no name for them yet – says Jakub Majmurek, in collaboration with “Krytyka Polityczna”.

– Sorry, this is bullshit. When I started working there 32 years ago, I never would have thought that in this place, for some time, the monotony could exceed one from the days of the Polish People’s Republic. And of course – wrote Tomasz Lis from “Newsweek Polska”. – This is television legitimized by people who made “historic trips to Kiev”, as state journalism puts it. This is television, which the government gives 2 billion a year with the signature of a president turned into a European democrat. Watch out, blind people – says Przemysaw Szubartowicz from Komuniko.co.


– Of things in slow motion, like “Wiadomości”, what I’d most like to see is the whole gang, after a sweeping kick in the ass, fly out of chairs in the way of Woronicza for a moment – admits Michał Danielewski of OKO .press. – Jacek Kurski, where are the Russian warships going – writes Bartosz Wieliński from “Gazeta Wyborcza”.


In the Wednesday edition of “Wiadomości” similar material by Maciej Sawicki was announced on the “strip” with the statement “EPP – Putin’s European Party”.

– Donald Tusk – in Hungary he supported anti-government opposition, some of which were previously known for their extreme anti-European views. Commentators negatively rate the head of the Civic Platform’s support for pro-Russian politicians – especially in the face of the war in Ukraine – said Danuta Honecka before publication of the material.


Donald Tusk referred to the next series of Polish Television material about him Monday night on Twitter. – You sowed hatred among Poles during the war that was fought on our border. No need wagnerist, just TVP – he wrote.


You sowed hatred among Poles during the war that was fought on our border. No need wagnerist, just TVP.


On Monday, “Wiadomości” in the main issue formulated among other things the former prime minister accusations of supporting Russia and Vladimir Putin, which – according to the author of one of the materials – will result in errors in the investigation of the causes of the Smolensk disaster.

Footage showing Tusk during a conversation with Putin is shown. Later in the material, the cooperation between Tusk and former German Chancellor Angela Merkel was recalled, and a fragment of the PO leader’s speech in German was recreated.


On Sunday, on TVP Info, the editor-in-chief of “Gazeta Polska”, Tomasz Sakiewicz, accused Tusk of involvement in the death of former president Lech Kaczyński.

“The Tusk government is doing everything it can to make Poland dependent on Russian gas. It is only because Lech Kaczyński lives for another two years before Tusk lets Putin kill him, that it is impossible to take this action so strongly and deeply that we can undo all this during the rule PiS,” said Sakiewicz.


Putin – a villain who is ready to do anythinghttps://t.co/2xF3tdfnQc


Donald Tusk is the anti-hero of “Wiadomości”

“Widomości” pays more attention to Donald Tusk than ever before, since the last one in the middle of last year. return to domestic politics, lead in the Civic Platform. There are weeks when material criticizing politicians appears on the program every day.

In January this year. in “Wiadomości” a series of material was broadcast to ensure that Donald Tusk was responsible for the massive increase in gas and electricity prices. In the following days, in the main edition of the program, it was repeated that during the leadership of Tusk, the rules for reducing CO2 emissions were set at the EU level, which now results in an increase, moreover, the European People’s Party led by the former prime minister did nothing. On the “strip” announcing the report, the following statements were displayed: “Tusk drains the pockets of Poles” and – twice – “Tusk taxes” hit the Poles “and” Tusk taxes “raised inflation”.

In one of the editions, the speech of the head of the PO was broadcast in far worse quality than the words of Mateusz Morawiecki, and the “strip” aimed at Tusk was also featured in the “Guest of the News”. However, Edyta Lewandowska at the end of the conversation with Jacek Sasin said: “Good luck, Prime Minister”.

From the middle of last year Many reports from “Wiadomości” show close-ups of the fist and watch on Tusk’s hand, as well as excerpts from his speech in German. Contrary to usual, the Polish version is not read in a foreign language, but the subtitles are displayed. Time and again his words “für Deutschland” are woven into the material about Tusk.

Many complaints were submitted to the National Broadcasting Council regarding this matter, one of which was submitted by Krzysztof Luft, in the past, among others, a member of the National Broadcasting Council, and currently a member of the TVP program board. In November, the chairman of the National Council delivered a speech to Polish Television, pointing to the need to comply with the provisions of the Broadcasting Act, which “requires the public media to present events and phenomena in an objective and reliable manner, and to encourage the free formation of public opinion.”

In mid-December, Luft and the former presidents of the TVP company, Janusz Daszczyński, and PO MP Iwona ledzińska-Katarasińska, filed another complaint with the National Broadcasting Council about the quotation of the word “für Deutschland” in Wiadomości.


According to Nielsen Audience Measurement data, in February last year. the main issue of “Wiadomości” was watched by an average of 2.94 million viewers (6.3 percent lower than the previous year), including 2.15 million on TVP1 and 785 thousand. on TVP Info.