From time to time on our site we will show you some of the impressive buildings in Minecraft, which have been built by skilled players over thousands of hours. Just last month it was a copy of Hogwarts bones (our article), we previously offered, for example, Tolkien’s Middle-earth (our article), a copy of the ruins of historic Corfe Castle (our article) or perhaps a fictional city the size of Los Angeles (our article).

Of course, not everyone understands such entertainment, as some consider it a waste of time. However, the overwhelming majority of people in our country have an understanding of such enthusiastic activity, even if the result is purely virtual and bread will not be cheaper for it. Entertainment is also needed in human life.

However, it is much more difficult to understand the motivations of players who appear on the Internet under the nickname Minthical. Unlike the projects mentioned above, it doesn’t create anything, but instead destroys it. He set himself the goal of “disassembling” the entire Minecraft map and destroying every block he made.

Of course, the act of destruction as a symbol of defiance is as old as humanity itself, but Minthical doesn’t offer any clues as to how to view his project called Bedrock Massacre. He was even more excited about it. 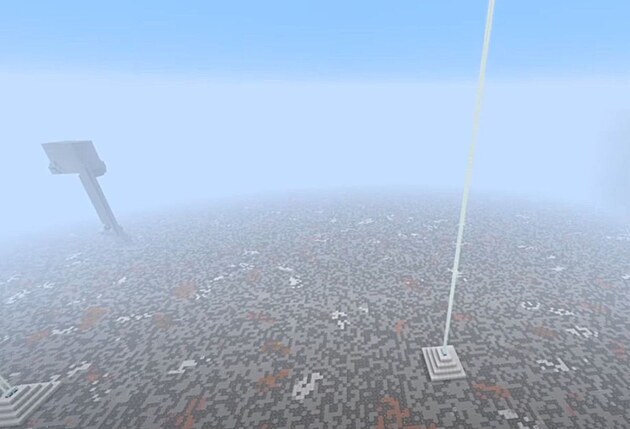 Yes, from the pictures, the result of thousands of hours of work does not look very impressive.

The well-known rule that destroying is easier than building applies to the maximum in the case of Minecraft in terms of intellectual demands. The disassembly itself is very time consuming.

At first, the Minthical map has roughly forty-seven million separate cubes, each of which must be mined separately. Not to be too easy, he begins the destruction in what’s called Survivor mode, which means his avatar is threatened by monsters and tormented by hunger and thirst. What’s more, he also had to be careful with work tools, which were constantly subject to destruction – he was said to have thrown away a total of over five thousand pickaxes.

And those aren’t the only impressive numbers. Minthical is currently playing the PS4 version of the game, which has clocked up over ten thousand hours of in-game time. At the same time, he recorded his gameplay on YouTube, the videos of which have a total of about two thousand hours. I accidentally clicked on some of them and it wasn’t much fun. No wonder he didn’t get more than fifty followers in the first two years. Today, he already has forty-five thousand, which only convinces him of the meaningfulness of the project.

And why does Minthical do this? In one of the videos, she somewhat pathetically claims that not only is she “building her legacy” in this way, but she’s even “helping others build their own legacies that will be seen through the years.” He accepts criticism and ridicule from those outside the community, but disagrees that it is a waste of time. It is said that those who do not play Minecraft do not understand that after completing the project, people will remember his name (or rather, Internet nicknames) forever. However, to defend himself a bit, he says that he has a full-time job and doesn’t stream every day, but only every other day, sometimes he even takes longer breaks.

And what will he do when his work is finally done, which is due next month? It will begin in a new map – Bedrock Massacre is said to be only the first part of a planned “dimensional slaughter” trilogy.