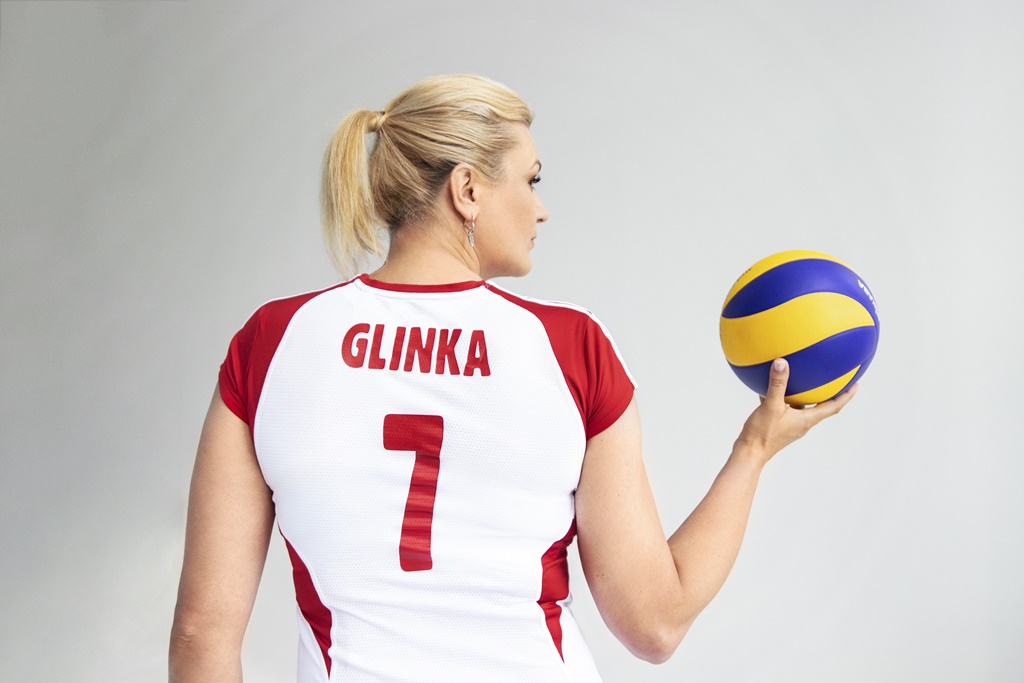 “Małgorzata Glinka. All shades of gold. The legendary Polish volleyball player has joined forces with Kamil Składowski and is the first among “Złotka” coach Andrzej Niemczyk to speak about backstage professional volleyball at the highest world level.

– This is a book that tells how to reconcile family life with playing professional volleyball. Of course, it also tells about my wonderful career. With this book I just want to thank everyone who supported and encouraged me – say Małgorzata Glinka.

One of the best Polish volleyball players in history decided to tell about his career and life – in an ice-free autobiography. The Złotek leader and two-time European champion is open to readers like never before!

What was the volleyball road that started in Bemowo and ended by winning the European championship and triumphing in the Champions League? What did Andrzej Niemczyk buy for a Polish volleyball player? How does this legendary coach convince his players that they can achieve the ultimate win? And what made the Złotek team fall apart? Who knows better than Małgorzata Glinka?

You can find the book here – https://bit.ly/3dV6kbS

Book quote:
“The Grand Final of the European Championship 2003. On September 28, we had the opportunity to win the Old Continent championship as the first team in the history of Polish volleyball! Gold has never been won by women or volleyball players, not even in the era of Hubert Jerzy Wagner’s brilliant team. We really wanted that we would make it. Surprisingly, we weren’t overwhelmed by the pressure. Maybe the tension was reduced by the fact that promotion to the finals itself was a huge success – after all, we have some silver medals. Who would have thought about that before the tournament? We rode from the hotel to the hall, confident that we will have a beautiful day, where we will collect the medals. It’s up to us what color we want. We are ready because coach Niemczyk prepared us for the match as best he can. During the briefing, he didn’t just talk about the game and tactics his competitors, but also added a few words of himself about each of them . He worked in this country for five years, so he knew the girls very well, he trained many of them. He assured us that if we played aggressively and effectively we would put pressure on them, they would eventually break. It was our job for the first set – to start sharp and not be overwhelmed by them.

A plan is a plan, but it still needs to be implemented… On the way to the Atatürk Spor Salon, I was calm and concentrated. I feel its power. Mental stability gave me training, and we trained really well. I’m playing better game by game, so I have no reason to worry. I told myself never to be afraid to hit the ball; even if I don’t finish the action, the world won’t collapse, no one will kill me because of it. I should focus and play like with Germany. If we won the game almost lost, why did we have to fail in the final?

I broke this contemplation when we tried to go to the hall. The bus went slower than the people with the Turkish flag walking beside it. There were already a lot of them in the semi-finals, but now I see a sea of ​​fans – waving, screaming and just dreaming that we are going to lose. Finally, the police made room for us and we went to the parking lot. Getting out of the vehicle, I felt goosebumps – not as good as the day before. Turkish fans shout all the time: “Türkiye, Türkiye, Türkiye!” Someone hit our coach with a hand, there was a huge crowd, we pushed our way through a crowd that clearly hated us. Incredible roars, whistles, aggression in the eyes. We ended up hiding in the building. Andrzej warns that it will, but it’s different to hear about spontaneous fans and feel their power in your own skin.

In the dressing room, we try to prepare for what awaits us on the pitch. At one point, the president of the PZPS, Mirosław Przedpełski, pops into it, smiling, tanned, all having fun. He wore a gold tie. I thought to myself: dammit, don’t let him confuse me… Every second feels long to me, I want to start playing, focus on what I do best. We went outside to warm up, expecting hell in the stands. The hall can officially accommodate eight thousand fans, but it seems that there are more than ten thousand fans in the final. Our first steps on the standarlex were accompanied by an eerie thumping, whistling and humming sound. When the Turkish women left, the applause stood and was deafening: “Türkiye, Türkiye!!!”.

It got louder when a politician appeared in the stands. He was surrounded by men in black suits, police with guns. I thought to myself: king or what? Then I found out that it was the prime minister and now president Recep Erdoğan. When the warm-up was over, I looked at the girls and I felt for the first time we were going to win. Despite the madness, the team was calm and concentrated. Meanwhile, Turkish women don’t look confident at all, I get the impression that they are under more pressure.

Many feel that playing in front of their own audience is an advantage. As a rule, this is true, but not always. When you drive, you win sets, your audience can take you, take you to fantastic games. But when it doesn’t go away, it can be very different. Especially when you’re playing against a team you should have won. And the Turks think that Polish women have no chance. In such a situation, the fans can kill you. At the first missed game from the stands, the sighs start to sound, you can see that some of them are holding their heads. If he didn’t go any further, there was silence in the hall. Emptiness began to ring in the head.

So before the first whistle, I saw fear in Turkish women. I understand that the first set will be the key. Whoever wins will get gold. I told the girls you had to start right. We have to stay focused from the first act. It wasn’t easy, because the hall was very hot, and the fans were tearing their girls throats. This is the first time in our lives that we meet.

However, we started calmly and well, we were carried away by the euphoria after the game against Germany. We smile after a successful act, no regrets after a loser, just a glance and we move on. After five, maybe ten minutes, I stopped hearing the Turkish fans, their screams merging into one continuous sound. I saw the ball and the score on the board: 14:9 for us! I didn’t feel tired at all after the last game. I wake up in the morning like a feather and I play. We were all training, our rivals couldn’t cope with receiving our licks or combinations in attack. We won 25:17.

Andrzej, standing on the side, smiled slightly – he already knew that we would not let him out of our hands. A deadly semi-final with Germany building our team, we are ready for an even tougher fight. It didn’t have to be that way in the final, as Turczynek’s game resembled a sudden pause in a gale, followed by silence very quickly. They tried to throw themselves at us, but with each successive action, their enthusiasm and aggression weakened. Likewise with the atmosphere in the stands. Already at the end of the first set one could feel the disappointment among the fans. The rivals must have felt it. We finished it early in the second game – after three aces by Kaśka Skowrońska we led 8:2. We won the entire fourteenth set. We’re just one party away from the gold medal!

The important moment came, as Turkey tried again – at the start of the third set they even took the lead, but we quickly got back into the game. By leading 20:14 it became clear that nothing would stop us. And I played better than in the semifinals. I’m used to winning. I’m always ready for the last ball. Of course, the importance of the match and the decisive action can sometimes make your hands tremble. However, this does not apply to me. But sometimes I get so choked up with emotion, I start to run out of breath. I’ve worked for years to be able to separate myself from anything that might distract me at key moments. It’s just me, the ball, the rivals and the court… At the end of the game, I feel how much fun it is to play with the girls. I’m glad we were able to come here, play in front of a crowd like that.

I feel that something big is coming. I’m concentrated, but at the same time excited and confident that I’m going to win. I saw the female lead of Turkey, Neslihan Demir – she had no illusions that tonight would be theirs. I looked behind the court, behind the board were bronze medalists from the Netherlands, including Ingrid Visser, my friend from Vicenza. As I waited for the final whistle, I saw more details around me. Finally, after a beautiful combination, Gosia Niemczyk scored a point on the importance of the European Championship! The last time a Polish woman won a medal at this event was in 1971, and one of the medalists at that time was Barbara Hermel-Niemczyk – the ex-wife of our coach and mother of Gosia! “