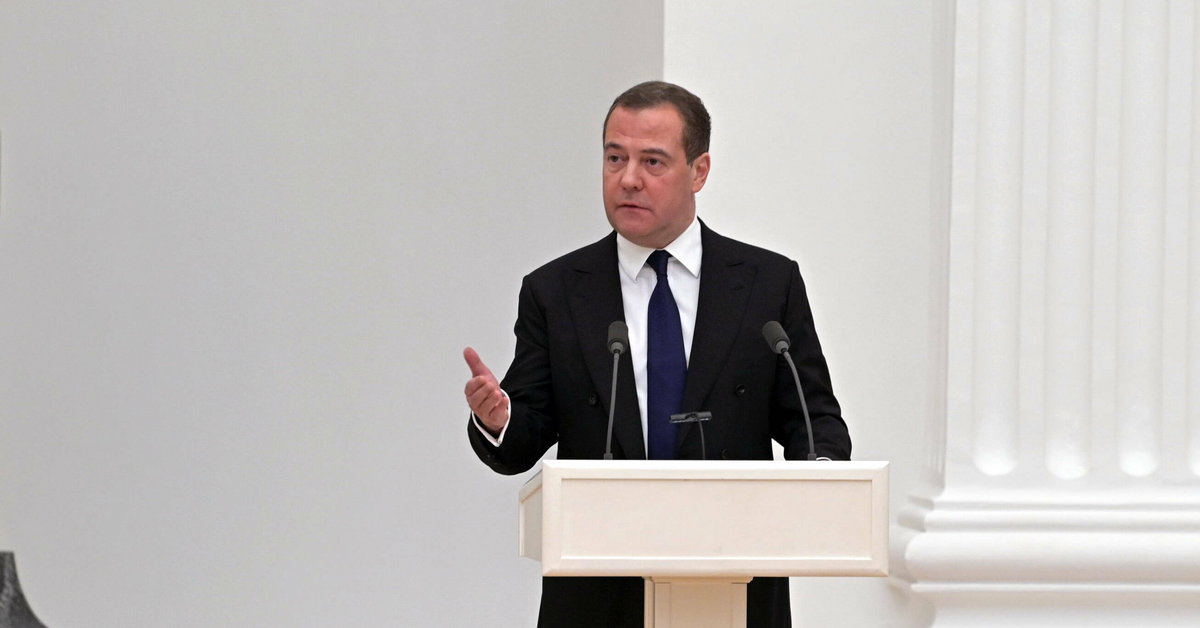 In Russian propaganda, an important organ of former Russian president Dmitry Medvedev, everything is turned upside down: Ukraine is a military aggressor, and Russia is spreading peace in the world. Medvedev, now deputy head of Russia’s Security Council, has again attacked the Telegrams of Western countries helping Ukraine, including Poland.

In his long messages on Telegram, Medvedev has included all the problematic themes of Russian propaganda. In his opinion, Zelensky sacrificed Ukrainian lives for his own political ambitions, Russia was simply trying to “demilitarize” Ukraine, and the desire of the Donbas people was to become part of Russia.

According to him, Western countries want to “benefit from the militant rhetoric” of Ukraine. “Why does Scholz need Ukraine?” – asked the former president of Russia in the text. “You don’t have to look far for answers. The Polish-Prussian alliance, which is trying its best to improve the situation (…) will benefit greatly if Ukraine as a country is no longer on the map.” In other words, Medvedev claimed that Poland and Germany were deliberately pushing Ukraine to war.

The rest of the text under the video:

Furthermore, Medvedev compared Scholz with Adolf Hitler. “In the late 1930s, someone spoke the same language and with the same enthusiasm. We know how it ended,” he wrote. Let us remind you that Olaf Scholz, Chancellor of Germany, criticized in many quarters for too little and ambiguous German involvement in the war in Ukraine.

However, there is a positive figure in the story of the Russian propagandist. This is Henry Kissinger, former US Secretary of State. At the World Economic Forum in Davos he stated that Ukraine should cede part of its territory to Russiaand its defense goes beyond its role in global politics.

Medvedev expresses full appreciation to him. “One of the oldest politicians in the world, former US Secretary of State Henry Kissinger, spoke at the Davos forum, asking Kyiv to make concessions to Moscow and make a prudent and realistic assessment of the situation,” the former Russian official wrote. President. “A young rooster should listen to an experienced eagle,” he added, suggesting that Zelenskiy listen to the words of an American politician.

Kissinger was widely criticized by Western commentators for his statements. – Russification, purge, genocide. How does Kissinger envision Ukraine’s acceptance of such a deal with Russia? – said in an interview for Onet Robert Pszczel, who for many years served as director of the NATO Information Office in Moscow.

Kissinger was also answered by the President of Ukraine, Volodymyr Zelensky himself. – In Davos, Henry Kissinger emerges from the past and says that part of Ukraine should be ceded to Russia. It appears that Kissinger’s calendar is not 2022 but 1938, and he thinks he is speaking publicly not in Davos, but in Munich, President Volodymyr Zelensky said in a video released late Wednesday.

Would you like us to describe your story or address an issue? Do you have an interesting topic? Write to us! Letters from readers have inspired us time and time again, and on their basis many texts have been written. We published a lot of letters altogether. You will find everything here.