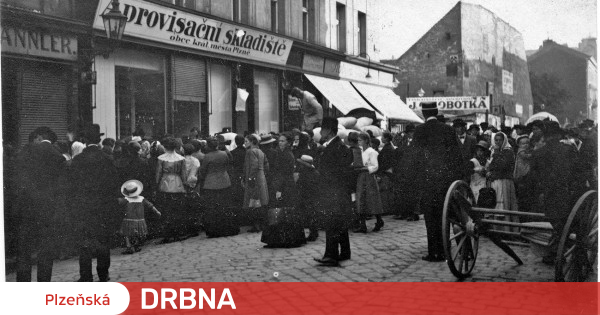 During World War I, not only did the men suffer in the trenches, but their families also suffered. The situation of desperation and food shortages resulted in massive protests. Starving townspeople took to the streets of Pilsen in the summer of 1917. But it wasn’t about peaceful gatherings. People started looting shops and raiding flour and bread. A 19-year-old girl died this year because of the protests. Another tragedy occurred a year later, when soldiers shot six children.

It was August 1917, and for the first time since the start of the war, the shortage of food on Pilsen’s store shelves was becoming very clear. People were starting to run out of patience and the situation didn’t improve even with the Pilsen district governor’s statement Václav Dvořákwho fired the desperate townspeople with the sentence: “Take it as it is.” But apparently he didn’t expect people to take his word for it.

View of one of the looted shops, photo: Starý Most Publishing House

Around noon on August 13, women and children took to the streets. Then, the men whose shift ended with them. According to researchers, up to 20,000 people gathered in the city center and other streets. There was no talk of an orderly protest. Angry mobs began looting shops, smashing shop windows and robbing grocery vehicles.

“He died soon after being shot from the street.”

The policemen were helpless against the angry crowd. The number of people and the intensity of the looting were completely beyond their power. It was only in the afternoon that the army used warning shots. At that time, in an apartment on the ground floor near the Dominican convent, 19-year-old Marie Schwarz was helping her mother do the laundry. When he heard gunfire, he ran to the window to close it. However, a stray shot hit her, and the young woman jumped to the ground with her head covered, with no sign of life. For the name, we find the entries in the matrix: “He died soon after being shot from the street.”

The family then sought compensation in vain for several years. In the end, the family received a fraction of this amount of the original 15,000 crowns, thanks to President Masaryk. Thanks to his “gift of grace”, the survivors received three thousand crowns.

Marie was the first civilian victim of the madness of the war in Pilsen. The funeral takes place two days after the tragic events at the central cemetery. The death of a nineteen-year-old girl begins a carousel investigation. There was no doubt that the shot came from one of the soldiers’ weapons. However, that was not the intention, so there was nothing to punish. The girl was in the wrong place at the wrong time.

The food shortage crisis reached its peak in mid-June 1918, when most food reached the front lines. Another blow to Pilsen residents came on June 19, when bread deliveries were halted. In the following days, a famine storm broke out in full force. Hundreds of people gathered in front of a bakery on the corner of Koterovská and Barrandova streets on June 21 at around six in the afternoon. There are also a lot of children on site. The angry mob then rushed to the truck full of bread. The 69th Infantry Regiment Platoon came to calm the situation. However, people started pelting the soldiers with stones. They responded by shooting.

Funeral of the victims of the shooting, photo: Czechoslovakian Legion Community

Twelve-year-old schoolboy Jaroslav Vali died right on the street, and five other children later died in hospital. The army’s incomprehensible actions resulted in a massive protest. The subsequent burial of the slain children became an unprecedented demonstration against the monarchy. A memorial plaque on Koterovská Street still commemorates the tragic event.