There will be a draw for the top 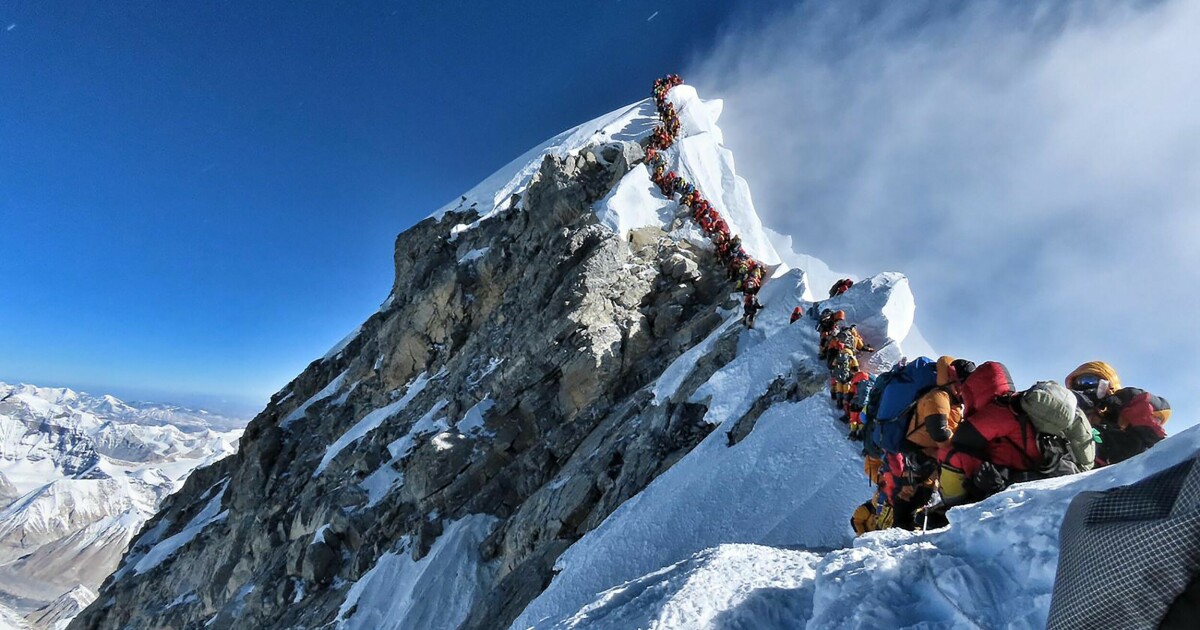 – It’s no longer the mountain that poses the greatest risk, but the number of other climbers, author and mountaineer Jon Gangdal told Dagbladet.

Even though the expedition had been commercialized, the risk of death had decreased.

More on that later. First, how professional tour operators add to the load on the mountain.

Running at the same time

The first ascent of the world’s highest mountain, Mount Everest at 8,849 meters above sea level, occurred on May 29, 1953 when Edmund Hillary and Tenzing Norgay managed to do so. The following year, K2 was climbed for the first time. Today, on the best days visited, there are about 150 climbs of Mount Everest. About 3,000 climbers visit one of the two base camps on Mount Everest in one season.

To reach the summit of Mount Everest, one relies on the “weather window”. The jet wind determines when such a good weather window occurs.

A Swiss company has over the years proven to provide the best analysis of jet wind movements.

– Expedition leaders each sat down with their own weather report, which they thought was only their own. The problem is that everyone has the same weather forecast. Suddenly everyone is in the same place at the same time, says Gangdal. He added:

– The later climbers also represent a risk to the Sherpas, who make this a workplace and so loyal to their clients that they even risk their lives to save them.

In 2019, Nepal’s Sherpa Nirmal “Nims” Purja set a world record when he climbed all 14 of the world’s peaks above 8,000 m. in one season – six months and six days. The photo he took while waiting in line on Mount Everest on May 22 that year has become world famous.

Mountaineer Jon Gangdal is all set – there’s no way many people are going to the top of Mount Everest at the same time:

– The quota system must be set with a limited number of people from each expedition that can reach the top. Then they can draw raffles internally for who will get the first, second and third top odds.

He believed that every expedition should plan so that not everyone would arrive at the same time, and they should use multiple weather windows as such. Then the expedition will take longer. At the same time, stricter requirements have been introduced for each climber’s qualifications, but they are neither sufficient nor too easy to circumvent, believe experienced climbers.

– Companies should inform that there is a raffle here, and those who are in the best condition can try first, he said.

1996 was the first major commercial season on Mount Everest. Since then, the players have only become professionals and more and more climbing tourists.

– In the past, the success criterion for a successful expedition was that you got one person to the top. Now the goal is to get everyone to the top and arrangements are being made for that, Gangdal said.

This development also means the load on the mountain will be much greater.

Adventurer, author, mountaineer and tour guide Stein P. Aasheim points out that Mount Everest and K2 have become “tourist” to a much greater degree. K2 is referred to in climbing circles as the “new Mount Everest”.

– Before commercial expeditions began in 1986, those who climbed Mount Everest were recruited from the climbing community. Now you don’t have to be a mountaineer anymore to travel. The Sherpas laid the ropes all the way to the top and it was a fully organized plan, Aasheim said.

When he climbed the world’s tallest mountain 36 years ago, they laid the route and all the ropes themselves.

Today, expeditions are run by professional companies, says Aasheim. The company prepared all the logistics, each participant who tried K2 this summer brought an average of 1.6 Sherpas, who carried luggage and oxygen for them.

In the past, it was common to operate with numbers like one in four climbers to K2, the world’s second highest mountain, died. This is far from the truth, especially now. In fact, the truth is doubtful.

So let’s see what the numbers actually look like:

Correspondingly, professional Sherpas over the same period had a 2.07 percent mortality rate.

– Thus, the death rate has been halved, says Jon Gangdal.

– There has been a tremendous development, which is related to the fact that there is more use of fixed ropes, ladders and more Sherpa assistance per climber. Previously, it was a requirement that everyone should be able to climb on their own. There are now one, two and three Sherpas per climber, often one pushing and one pulling, Gangdal said.

Littering litter has become another problem with major expeditions to the roof of the world. Several clean-up measures have now been launched, and deposits have also been introduced on oxygen bottles and the obligation to bring back tents and other equipment.

– I think trash isn’t a problem now. It’s much stricter – if you’re not in mortal danger, you have to throw the trash out again. Each expedition must also prepare toilets with plastic tubes that are weighed before being carried from Base Camp by cox yaks, Gangdal said.

But climate change is also being felt here.