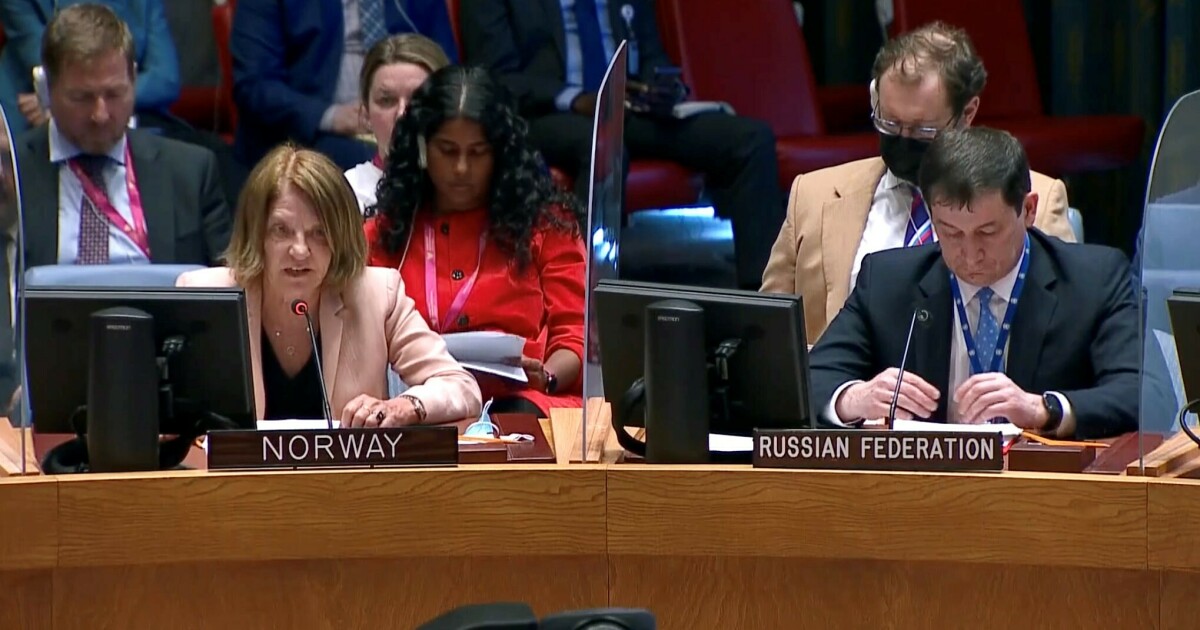 NEW YORK (Dagbladet): Russia is one of five countries with veto power in the council, but now Norway and 50 other countries will make it difficult for Vladimir Putin’s delegation to the United Nations to veto.

On the Security Council, Juul sits next to the Russian representative, while the world has been shaken in recent weeks by Russia’s attack on Ukraine and the immense human suffering.

– This is definitely a demanding situation. But even if Russia can veto it, it’s still important to have an arena in which the warring parties can have face-to-face discussions. The UN Security Council is the only meeting forum in the world where Russia, Ukraine, affected neighboring countries and other members of the Security Council can discuss publicly what is happening on the ground, Juul told Dagbladet and explained:

– We heard from UN organizations, representatives of civil society and eye witnesses what happened, and we got the opportunity to refute Russia’s lies. Norway can also propose topics for discussion at the Security Council and thereby shed light on the problems Russia is trying to avoid.

On Tuesday afternoon, the Security Council met at UN headquarters in New York, as they have done many times in recent weeks. Again, refugees and the humanitarian crisis in Ukraine became a topic of conversation. Irish Minister of Foreign Affairs and Defense Simon Coveney told the Council about the shocking effects of his recent visit to Ukraine

– I have lived long enough to see the difference between real and fake propaganda, and nothing is made up of what I see. Men, children and women have been killed directly – sometimes after being tortured, Coveney explains.

At the same time, Russia’s deputy ambassador, Dmitry Polyanskiy, used the time before the meeting to reiterate Russian propaganda that the United States is helping Ukraine develop chemical weapons.

Norway sits on the Security Council until next year, and UN Ambassador Mona Juul was also among those who on Tuesday came out with strong criticism of Russia.

Russia created the biggest humanitarian crisis in Europe since World War II. All Russian attacks on civilians must stop. Those responsible must be held accountable, he told the Security Council, with a Russian representative sitting next to him.

– We are shocked by the actions of Russia in Ukraine. Nothing is safe anywhere in Ukraine. Twelve million Ukrainians have now fled their homes, he said, adding:

– Russia itself is responsible for the war in Ukraine and its global consequences, he continued.

Even though the majority of the 15 nations on the Council wanted to intervene, any resolution or decision that might criticize Russian President Vladimir Putin and the regime’s behavior has been effectively blocked by Russia via a veto.

This led many to criticize the UN for being lame and irrelevant.

The President of Ukraine, Volodymyr Zelenskyj, also criticized the Security Council when he addressed the Council on April 5.

– Where is the security that the Security Council needs to guarantee? It doesn’t exist even though it’s a security council, Zeneskyj said after describing the appalling human suffering.

Now there are also forces in the United Nations that want to reform the Security Council with the aim of making it more active. Liechtenstein has submitted a proposal, which is supported by 50 countries, including the United States and Norway. The proposal means that veto states should do more to justify removing vetoes.

According to the proposal, any veto imposed on the Security Council will be discussed in the UN General Assembly within ten days. Decisions there are non-binding, however, and the rally cannot waive charges in the form of sanctions or other punitive measures, NTB wrote.

– The Security Council acts on behalf of all UN member states. This proposal, presented by Norway, would hold veto powers accountable for the exercise of their veto power and would, in practice, have a function that limits veto power. Transferring cases to the UN General Assembly would also help strengthen international cooperation among all UN member states on important security policy issues, Juul told Dagbladet.

The United States supported the proposal. France and Britain also said they would support it, but China and Russia would probably say no.

UN member states meet on the proposal on Tuesday, and they will vote next week.

At the same time, Juul stressed that he believes the UN system as a whole is doing very important work in Ukraine and neighboring countries, including raising money from donor countries and coordinating major humanitarian operations that helped more than 12 million people flee their homes. also. as millions of civilians, who are still in war zones and lacking food, water and medicine.

– The Security Council has also secured action from the UN General Assembly, including suspending Russia from the UN Human Rights Council, Juul said.

Since the founding of the United Nations, the Soviet Union/Russia has vetoed 143 Security Council resolutions. The United States has done it 86 times. Great Britain 30 and China and France 18 each.

It’s also not the first time the UN General Assembly has discussed the veto power of five permanent countries on the Security Council – Russia, the United States, China, Britain and France.

A total of 295 times since 1946, the General Assembly has discussed this right, meaning that one in five countries alone can block decisions in the Security Council.