The 12th year of the Pride of Prague festival has begun, culminating in a parade from Mstok to Letná 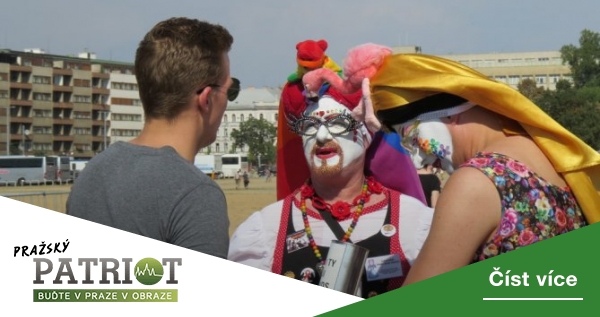 The carnival parade returns to the festival program. Photo: archive

The multi-genre human rights festival Prague Pride takes place from yesterday to Sunday. According to the organizers, from the supply side of the program, it exceeds previous years. The program will offer more than 150 events in various locations in Prague. The main festival location throughout the week remains Strelecky Island. Plus, Saturday’s parade is back after a three-year hiatus. It will head to the plains of Letenská, where it will culminate with its musical and accompaniment program. Festival director Tom Bílý informed him.

The week-long 2022 Prague Pride Festival was officially launched yesterday with a rainbow flag hanging ceremony at the New Town Hall building. This year’s edition will offer events in the fields of culture, entertainment and education.

“This year’s festival of freedom and tolerance is here, and with it many cultural and educational events, which remind us that if humanity is not lost to modern civilization, we need to find ways that unite us, not divide us,” said the Prague councilor. Hana Třeštíková (Prague to self)

“The Festival of Pride of Prague is here for everyone. I believe that this year’s truly rich program will attract LGBT+ visitors and the general public. From Monday to Sunday, both art lovers and people who want to educate themselves or just have fun -it’s a pleasure to enjoy them. Concerts, exhibitions, but also a number of debates and lectures on important topics await us. Every day from evening to night, it is possible to experience the unmistakable atmosphere of the Pride Village on Strelecky Island, where everyone can be themselves and share their well-being and joy with others,” said festival director Tom Bílý.

According to him, this festival wants to draw attention to the situation in the world, especially in the Middle East, in Africa, but also in other corners of the world, where human rights and individual freedoms are being suppressed, especially LGBT+ people.

“Even in Western countries, hate attacks are still happening, a sad example is the recent attack on the LGBT+ community in Oslo, Norway, which resulted in two deaths and dozens of injuries,” continued Bílý.

This year’s festival will offer many events that visitors have come to know about from previous years, such as the talk show Pride Voices, where some of the leading queer personalities will share their inspiring life stories with the audience, picnics in Pride Village, quiet evenings directed by HateFree Culture, and more.

The organizers also prepared some new things. These include, for example, the Andaz Lounge event: Goals, points, kokoti LIVE at Prague Pride aimed primarily at righteous allies, as well as mentions of supporters and allies of LGBT people. Another novelty is the Pride Conference, a two-day human rights conference for the professional public, which will focus primarily on the lives of LGBT+ people in the Central and Eastern Europe region.

To the parade without a car

After three years, the Rainbow Parade is also back, set to take place on Saturday, August 13th. It will be car free again. Musical accompaniment will be provided by portable speakers on cargo bikes and marching bands. Parade participants will meet at Wenceslas Square starting at 11:30.

The front of the procession will leave Můstek at 1 pm and pass through the streets of the Old Town, including the Old Town Square, then through Pařížská Street and over the echův Bridge to Letná.